One of the many things I love about traveling is getting a new perspective on the world. And as I've grown older, I've been able to do this more so because my maturity can now handle reading an entire newspaper without just flicking though to look at the pictures.
So as the saying goes, when in Rome, do like the Romans! So the morning of day five, I pulled on my clothes and went downstairs to have another brilliant buffet breakfast (I'm telling you, I have no idea how I didn't gain at least 10 pounds after coming home from this trip!) and picked up a copy of the local newspaper (which, thankfully, was in English).
As I read about Indian businesswomen making their ventures known, I came across the pop culture section which was dotted with bits and bobs of gossip. As I spotted a quote from on of my favorite comedians, Joan Rivers, I couldn't help but laugh not only at her joke, but at the fact that the magazine had to put a smily face saying 'Joke' so that the reader would know it was supposed to be funny! Such an adorable touch and really made me fall for the Indian population that much more. 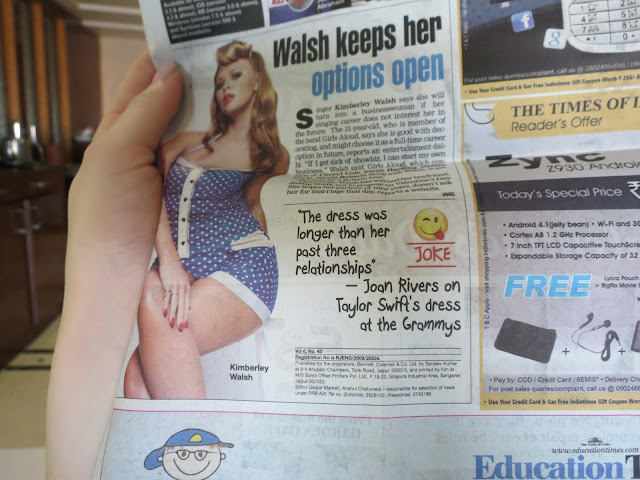 Well, as was the ritual for the past several days, we got in the car and headed over to Mandawa - a small little town in the boonies that is known for its Havalis, or abandoned mansions that were occupied with royal families thousands of years ago. 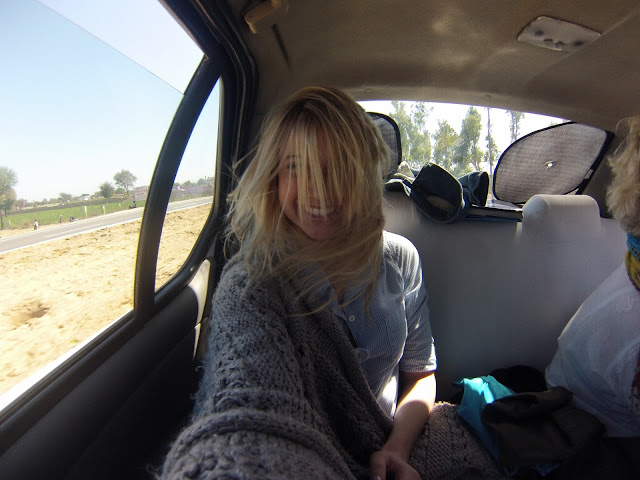 Given that it was a 4 hour drive, we knew we would be stopping to stretch our legs often. So the first stop (which made my mum and I very happy) was the textiles store. 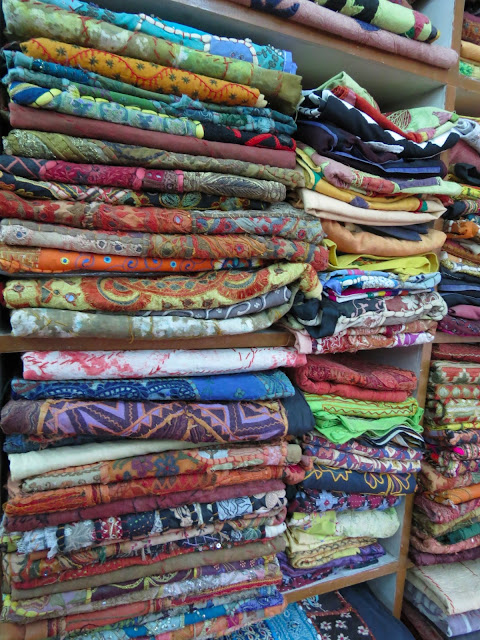 All of the Indian treasures you could imagine and more! 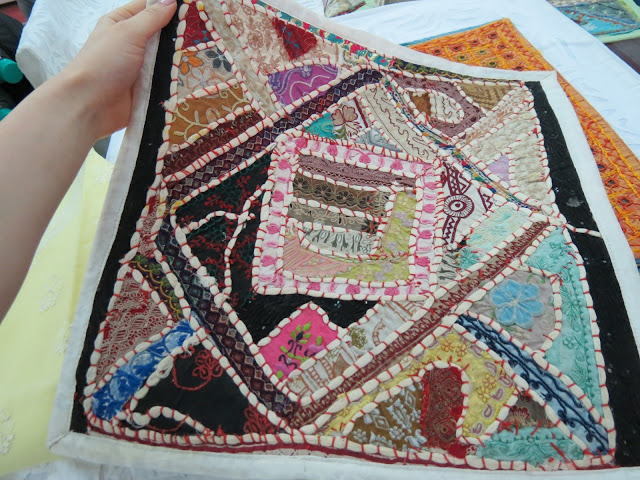 After going into a shopaholic coma for several minutes, I got a grip on my urge to buy everything and started sifting through all the goods. It didn't take me long until I found this little gem. It's a pillow that was made from old wedding sarees (traditional wedding dress) and pieced together by hand. The craftsmanship in these pieces were truly amazing! 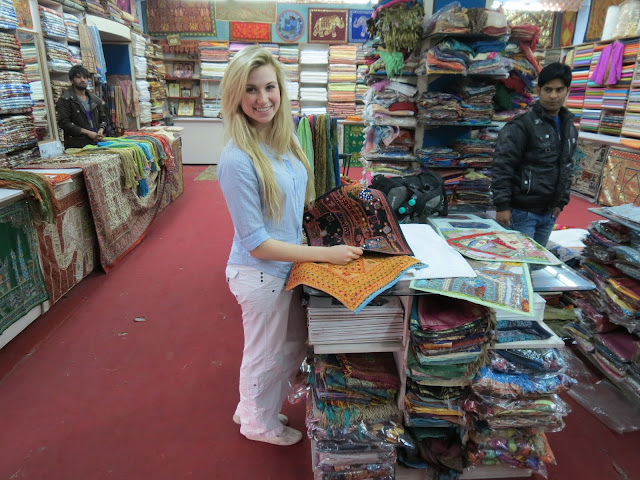 As you can tell, I could've spent all day looking around and marveling at my findings!
But all things must come to and end, so as we packed up our goodies of pillows, shirts, and textiles, we continued our journey to Mandawa. 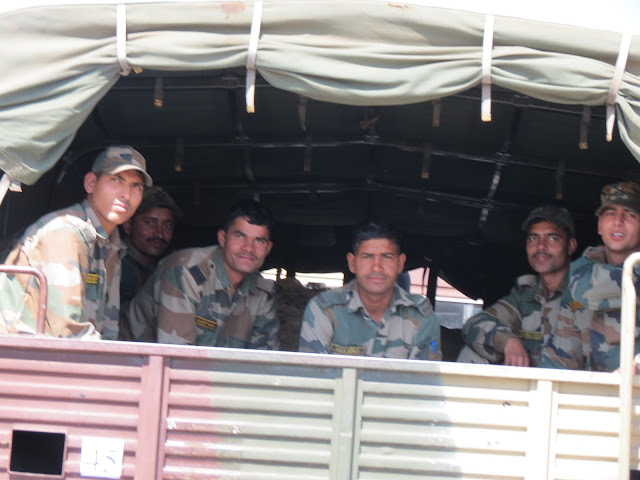 And made some military friends on the way! 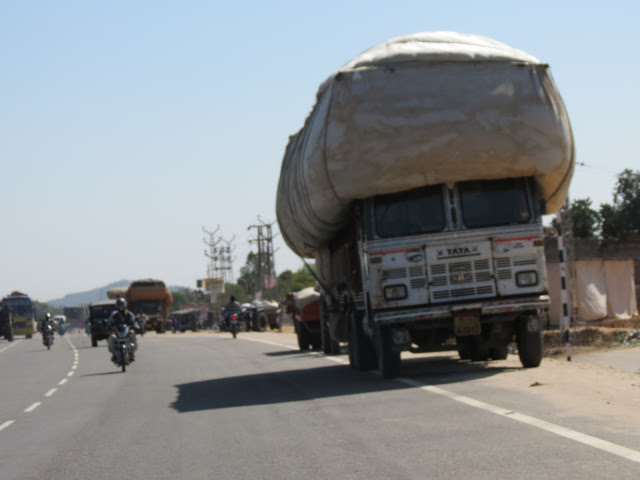 A popular Indian saying is that life is on the road. I have never seen a place where this is quite literally meant! You see travelers living on the sides of roads, shops on the side of roads, and guys hanging out on the side of the roads. 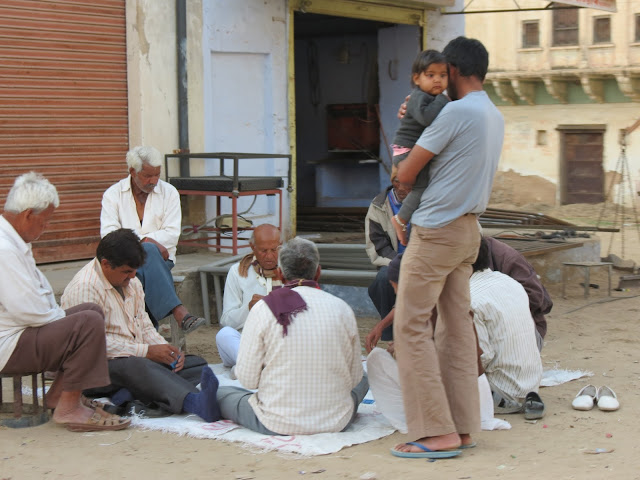 There really is no shortage of things to see! Especially when guys get the urge to 'go', they park their bikes in the middle of the roads, get off, do their business on the side of the road, and get back on their bikes and head off. It's funny to see so many people doing it and so many witnesses not bothered by it! But hey, when you gotta go you gotta go right? 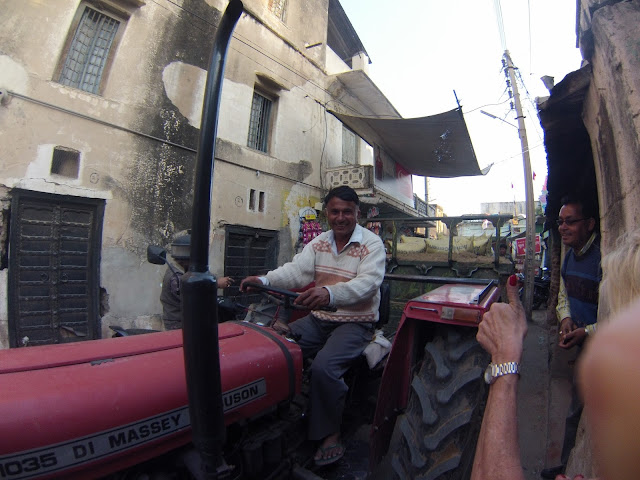 After finally arriving in Mandawa, we dropped our stuff off at the hotel and met up with our tour guide who took us around the town. I must say, on our way there, we were skeptical that we would find much of anything in Mandawa. As we were driving, the only living things we saw were trees and cows but not much else. So we were very happily surprised to see that a town in the near distance wasn't a mirage after all. 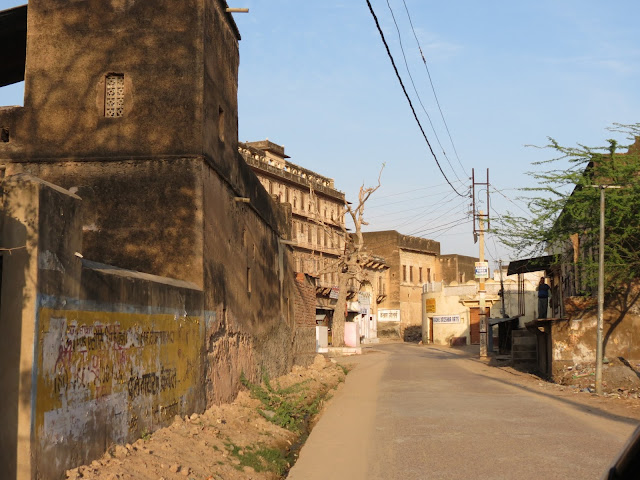 Thankful to be out of the car, we visited our first havali. You can see that these mansions were owned by very wealthy people because they're intricately decorated with fresco paintings and carved architectural pieces. 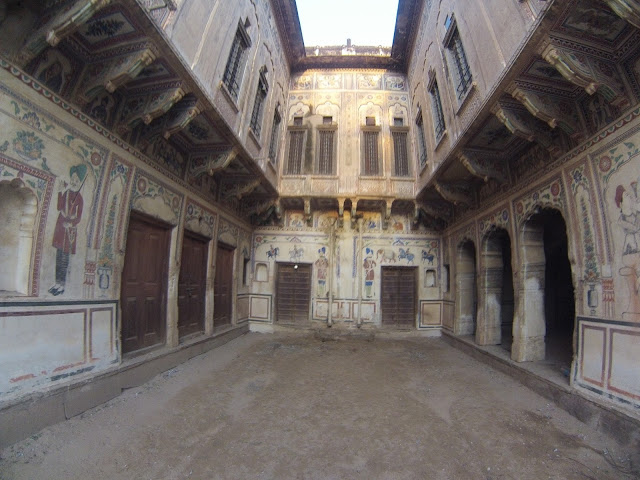 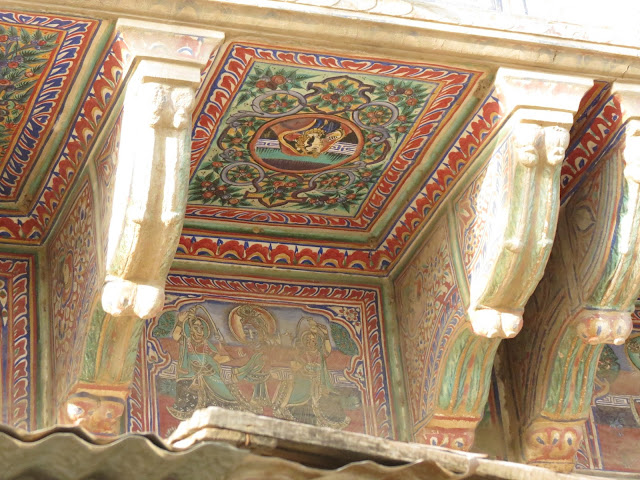 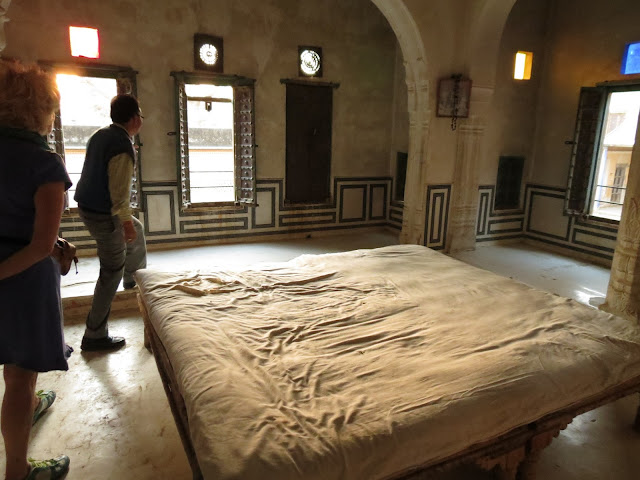 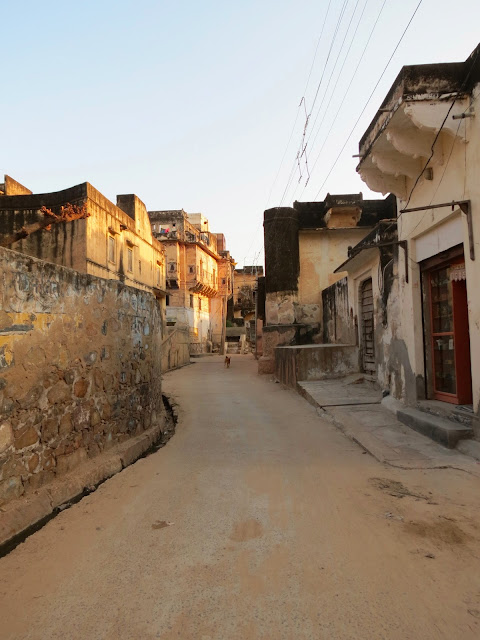 As we walked through the streets, these pots caught our eye. Their purpose at first unknown was casted light on by our tour guide. They're water jugs for the local people and are filled up with fresh water daily. I loved that this community was so willing to help everyone else out - especially since it was a place where everyone seemed to know everyone. Hard to find this much compassion in SoCal if I may say so myself! 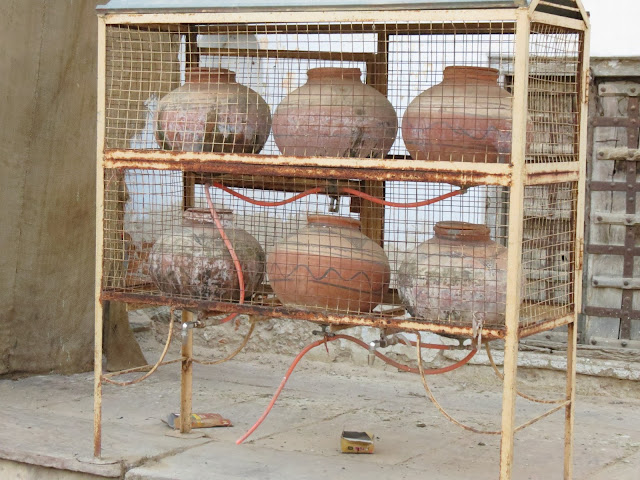 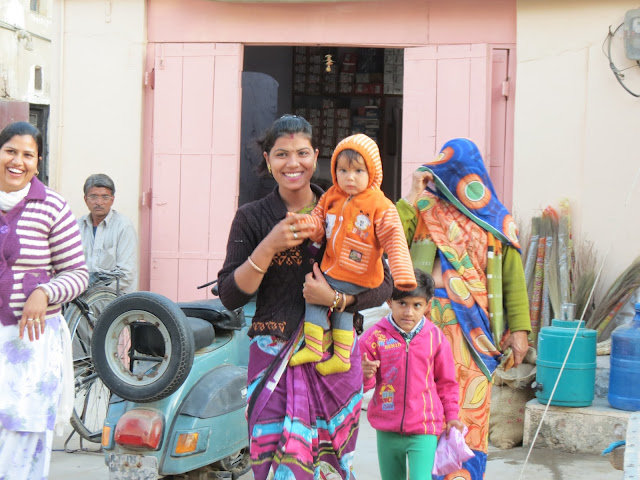 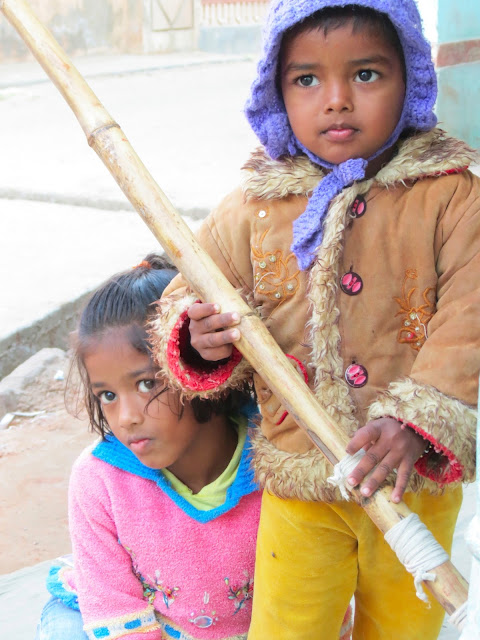 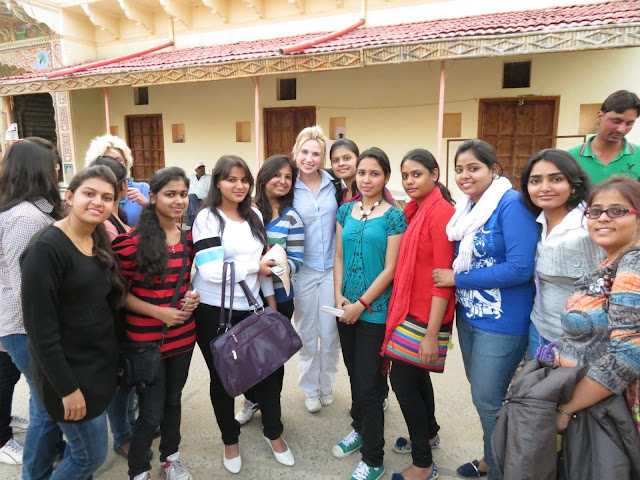 Delhi, Jaipur, and Agra never failed to surprise us, and Mandawa was no different. As we walked down the streets and admired the history behind the walls, we ran into a group of college girls who were waiting for the arrival of Bollywood super star Akshay Kumar to film his newest movie. Gotta love the old world and new world coming together! 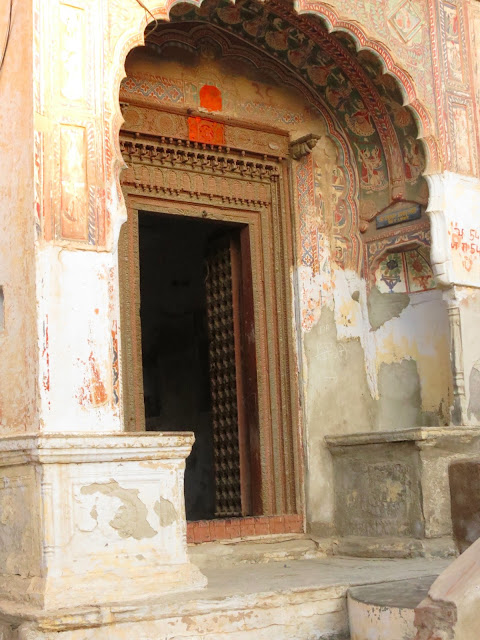 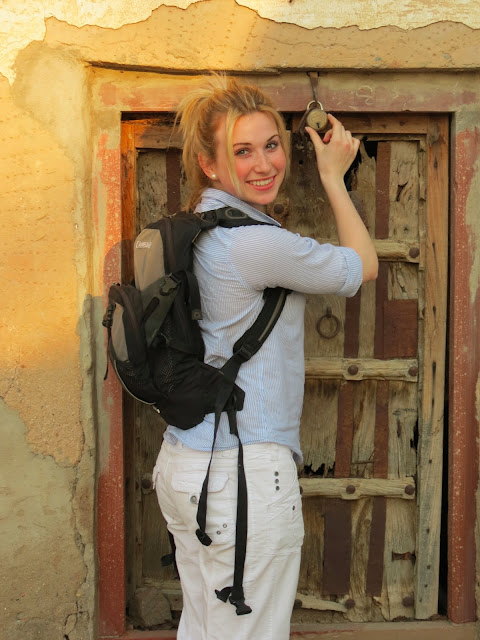 But before we left India, we wanted to make sure we took a piece of its history with us. And what better way to do that with hand made shoes?! 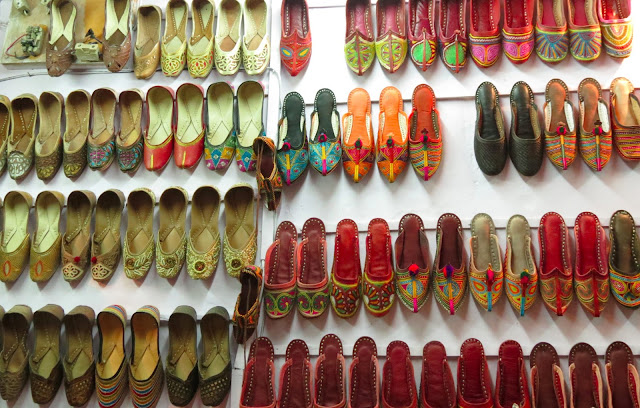 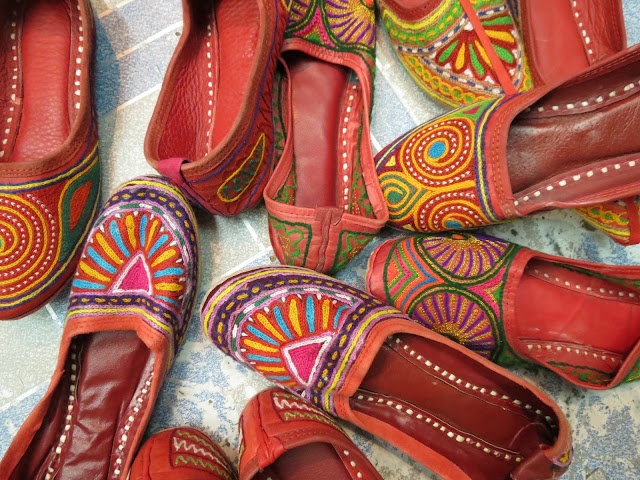 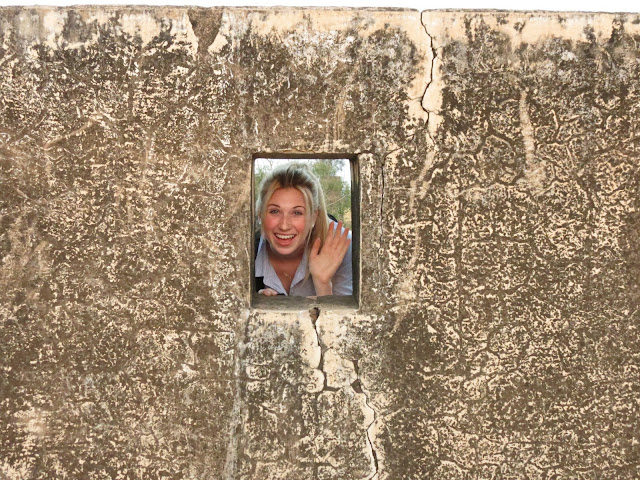 Well this trip was hands down an adventure of a lifetime. The only way I'm able to describe this magnificent place is 'rich'. It's rich in people, culture, food, and history. Despite its rough and tough appearance, I have never met such amazing people, eaten such mouthwateringly good food, and discovered such a majestic history in any of my other travels. I completely submerged myself and only came out realizing that I've only just scratched the surface. Be ready, India, I'm coming back for you in the future.