Not only is Boston considered the college playground of the nation, creative hub for businesses, and the most picturesque city during every season, but it's also only a short 4 hour drive down to my favorite city on the planet - New York bloody City. 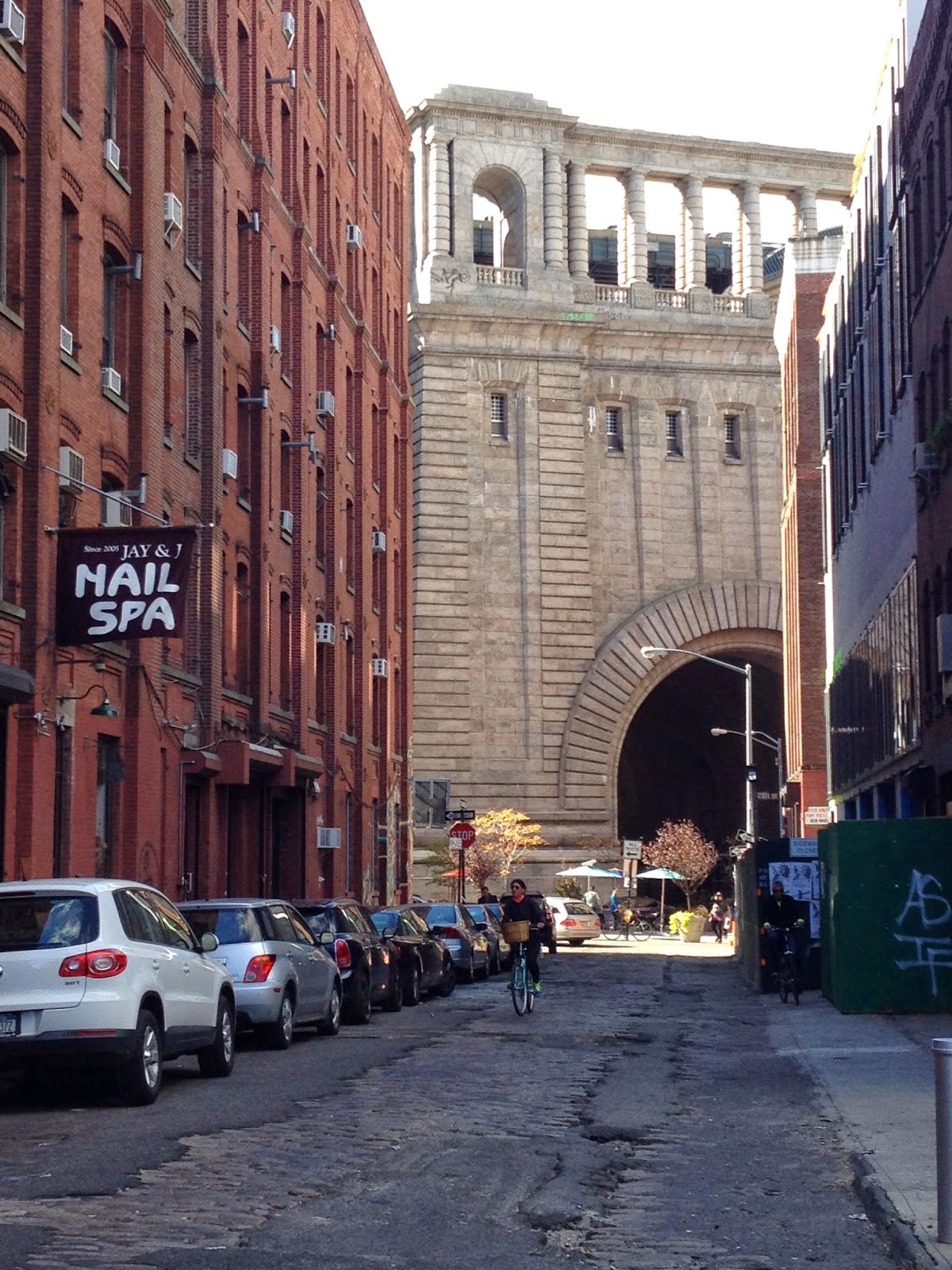 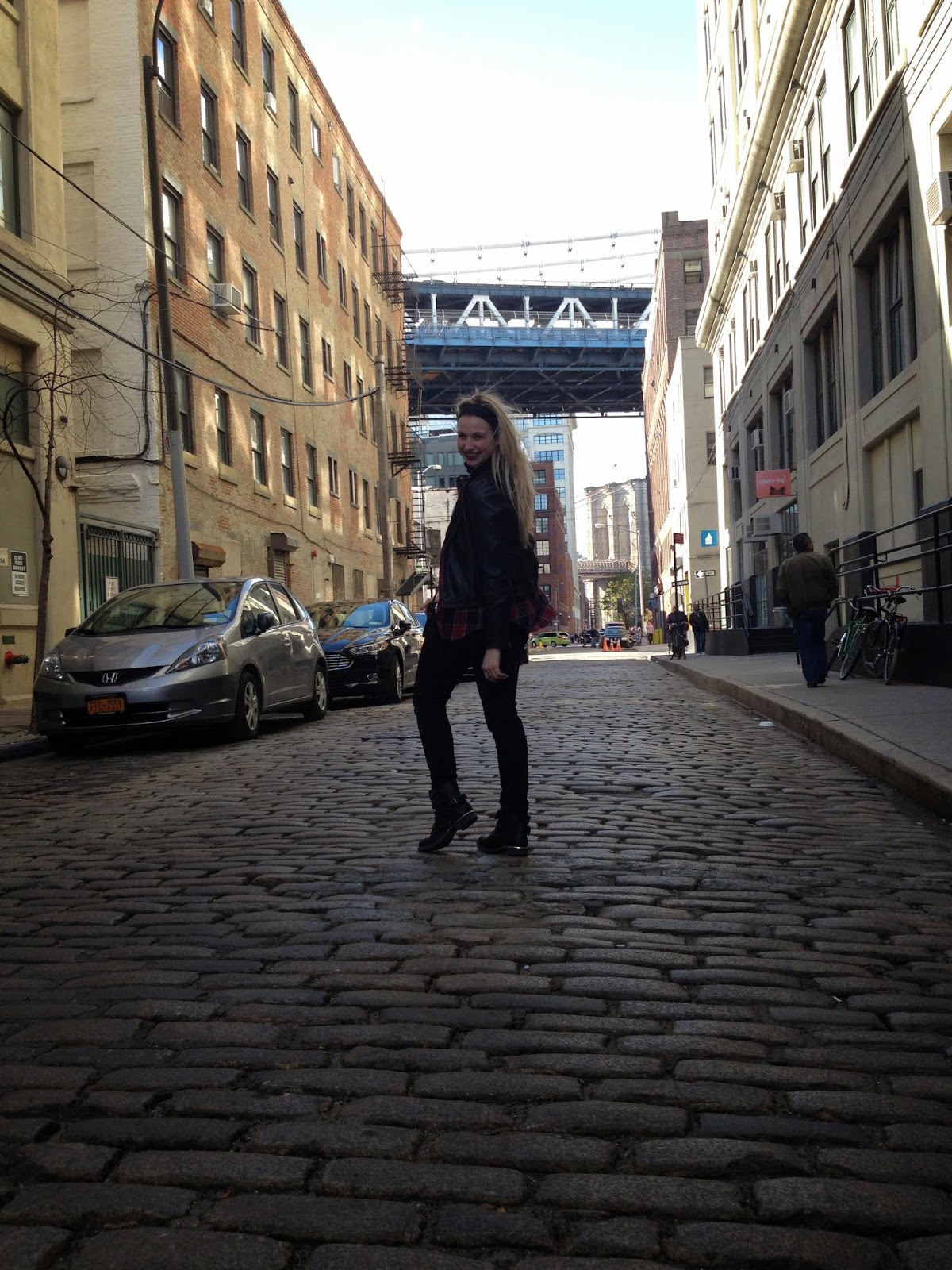 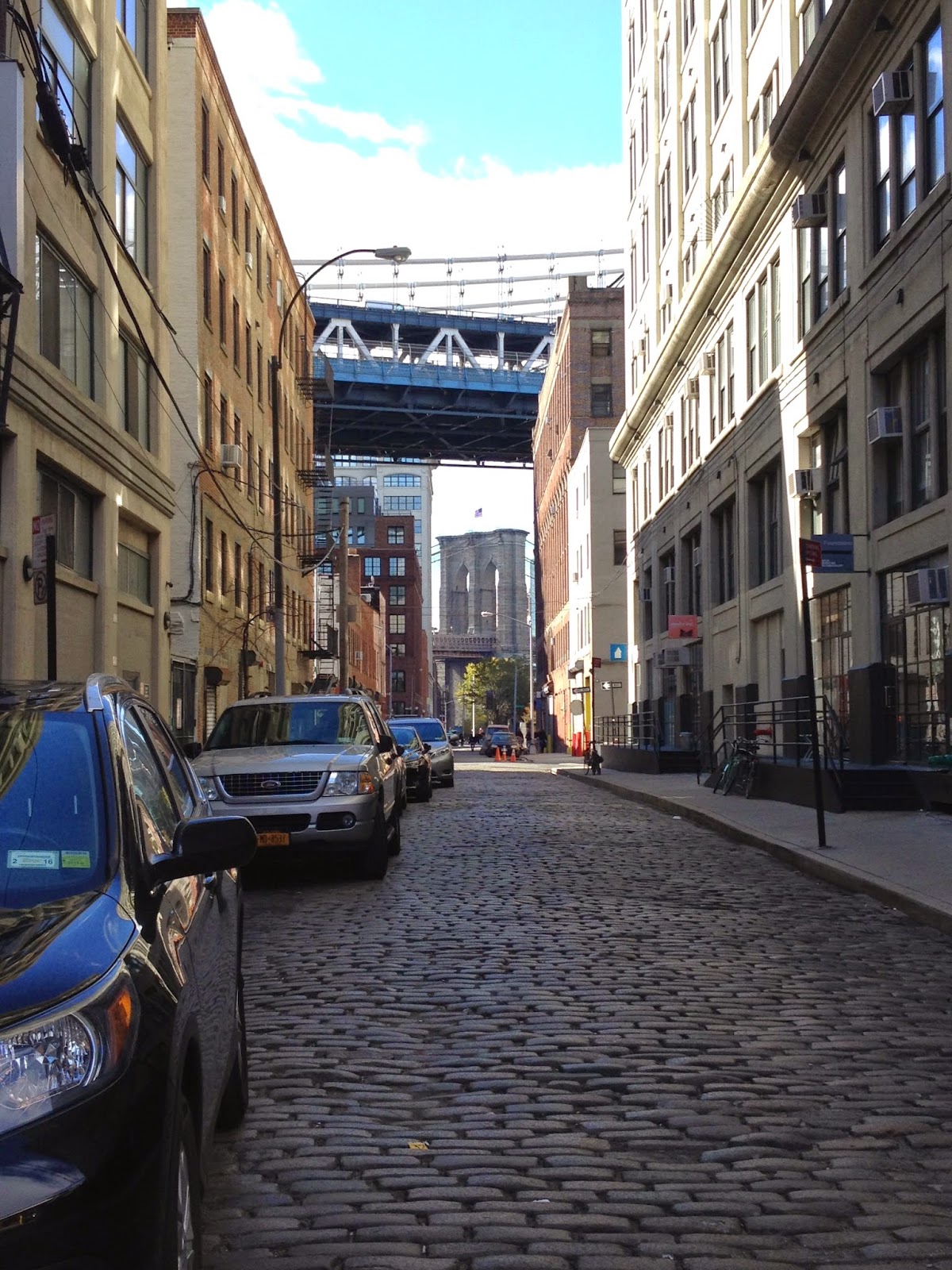 I'm sure you've seen plenty of sitcoms, movies and TV shows to know that in NY, there really is something for everybody. Street performers for the curious, Central Park for the environmentalists, authentic Italian pizza & Cronuts for the foodies and more. Since I thrive off of local culture and eating food representative of it, I took Lily to one of my favorite weekend events in town - Smorgasburg.

Located in Brooklyn, this weekend food market is the perfect way to experience the city & the diversity it cultivates. Shop owners from across the city get together to sell their goods and enjoy the mix of hungover locals and wide-eyed tourists while we scarf down their food without a second to spare. 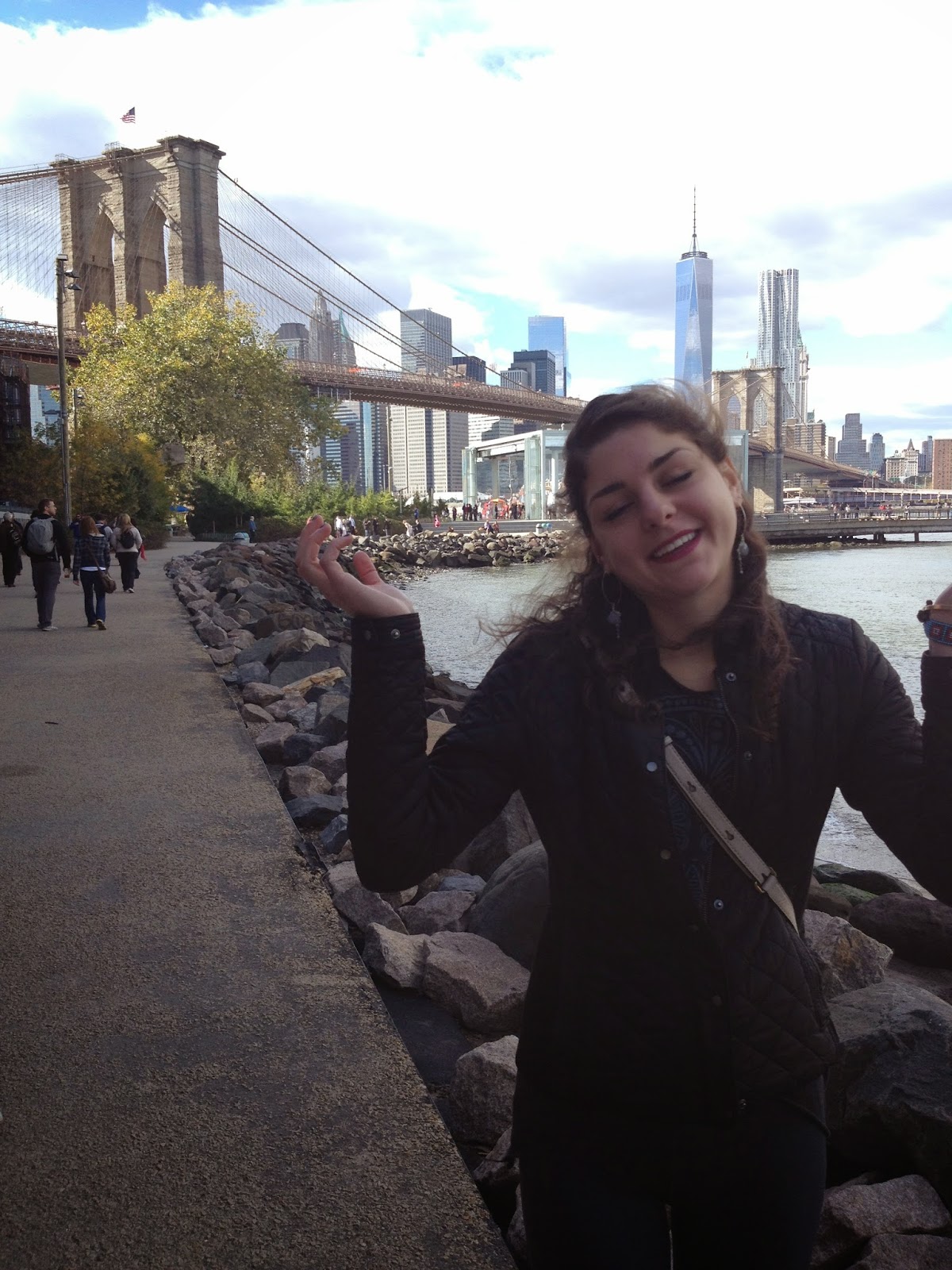 She had no idea what to expect... 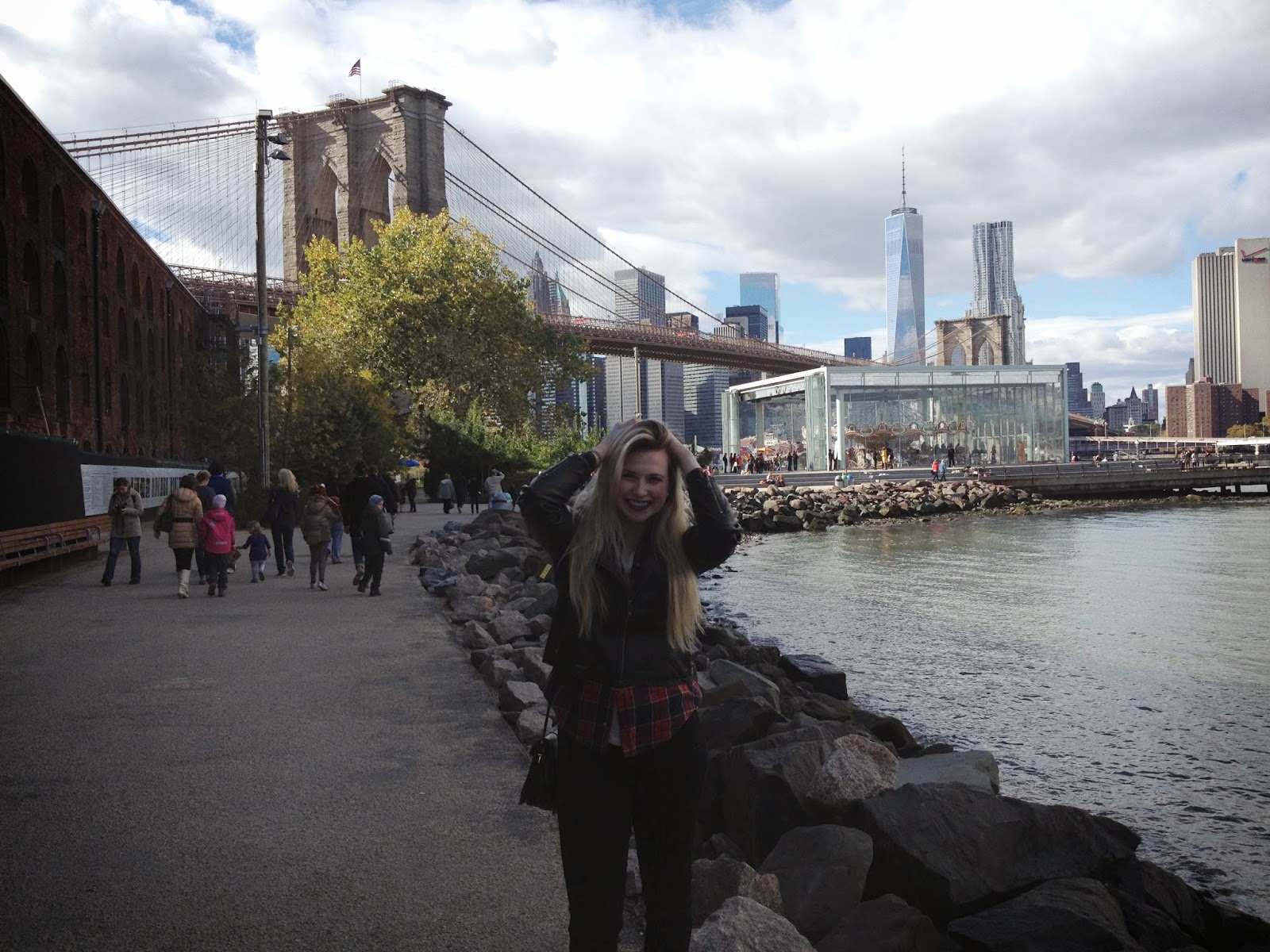 whereas I was too excited to contain myself. 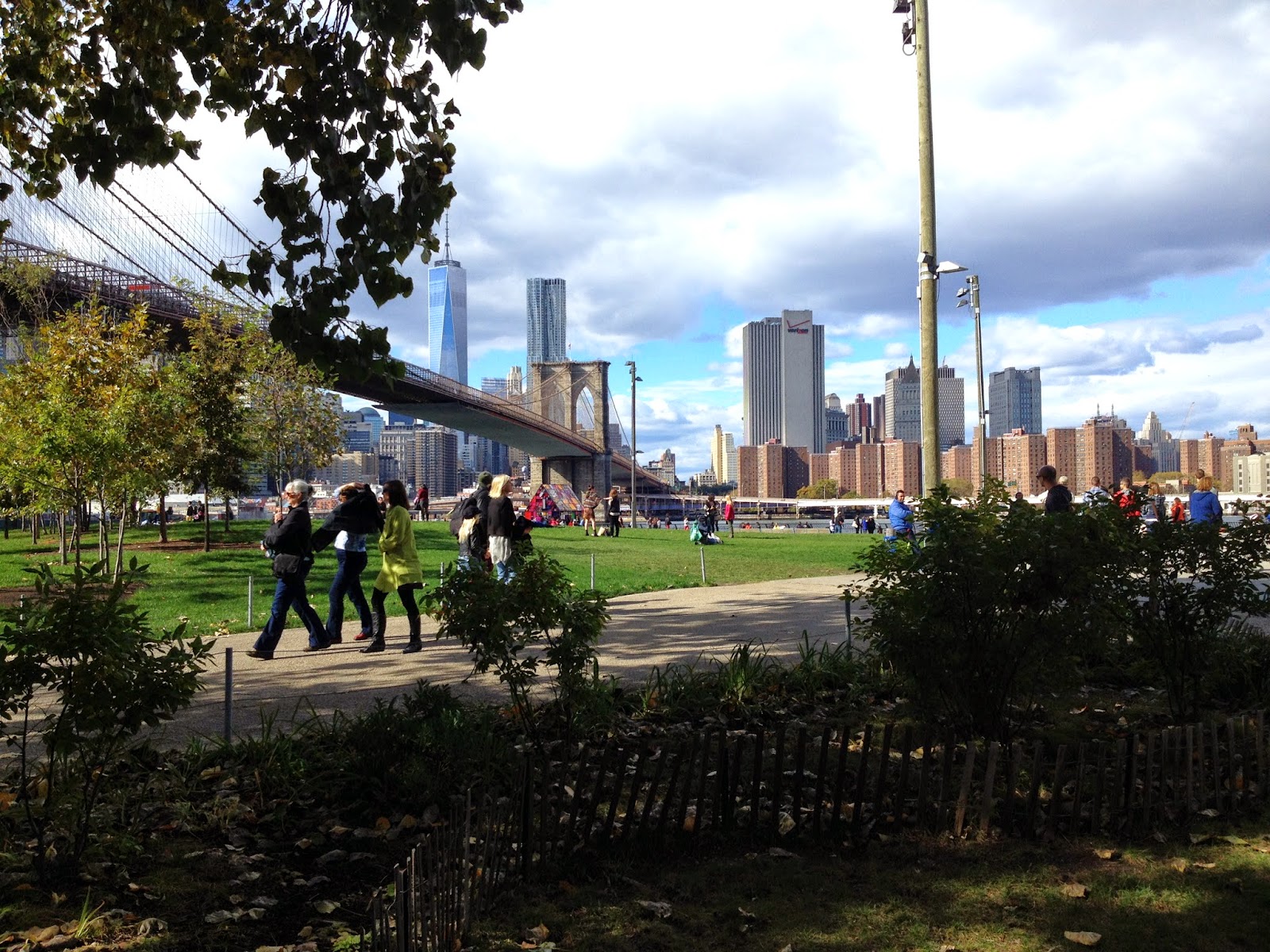 On Sundays, during the early weeks of fall, the market is held outside on one of Brooklyn's piers. We strolled and soaked in the sporadic sunshine and took to some people watching & sight seeing. 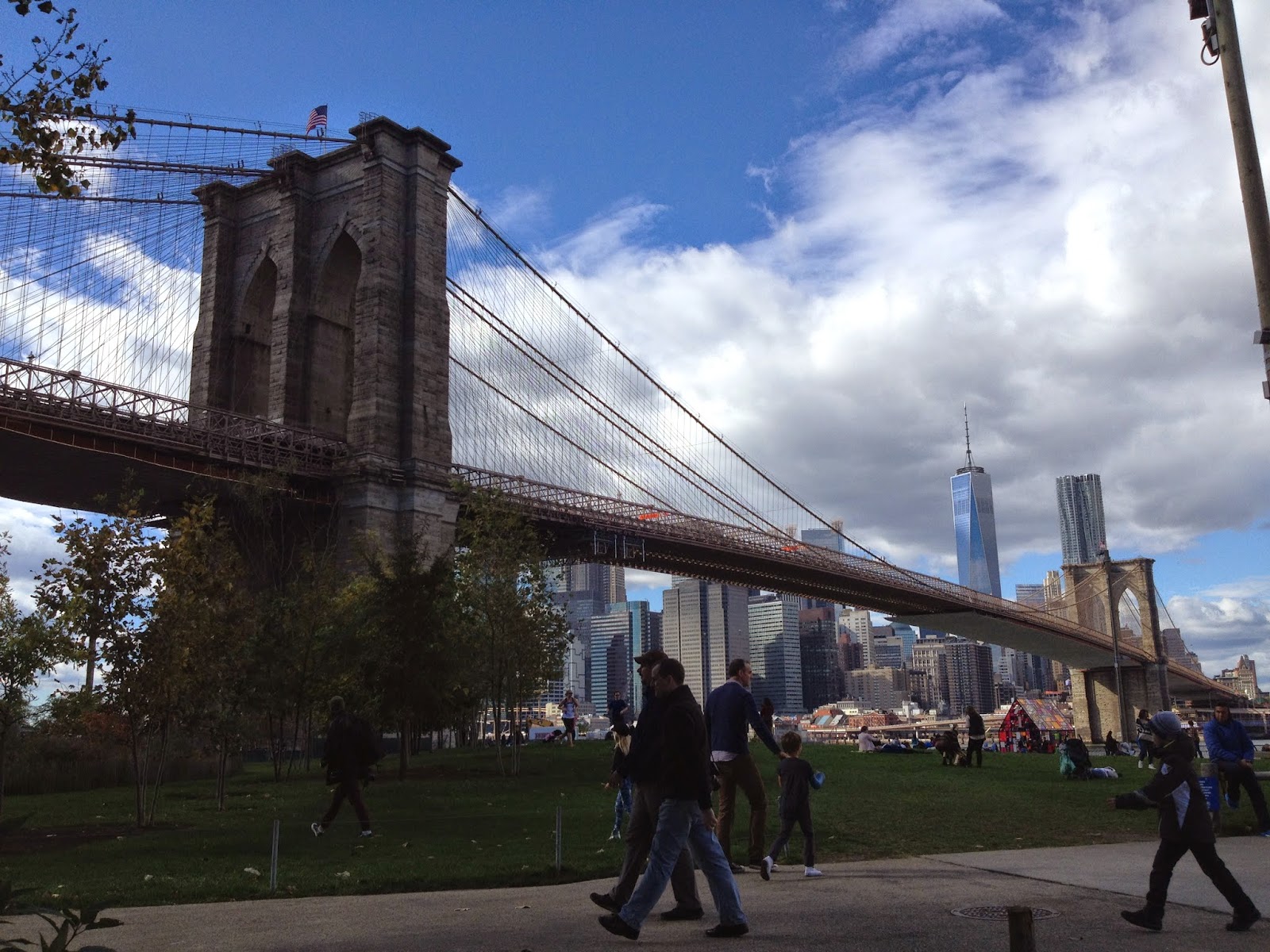 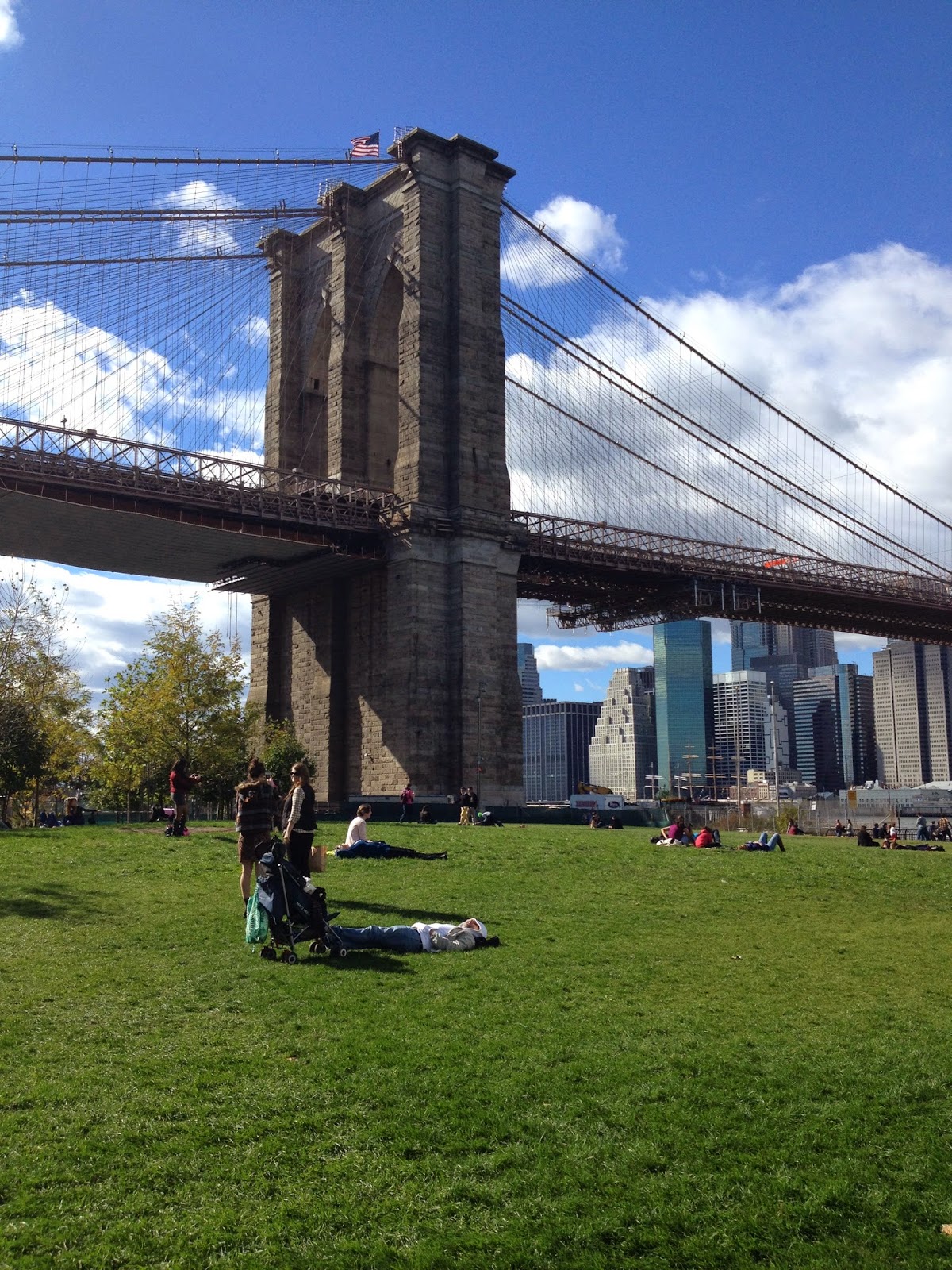 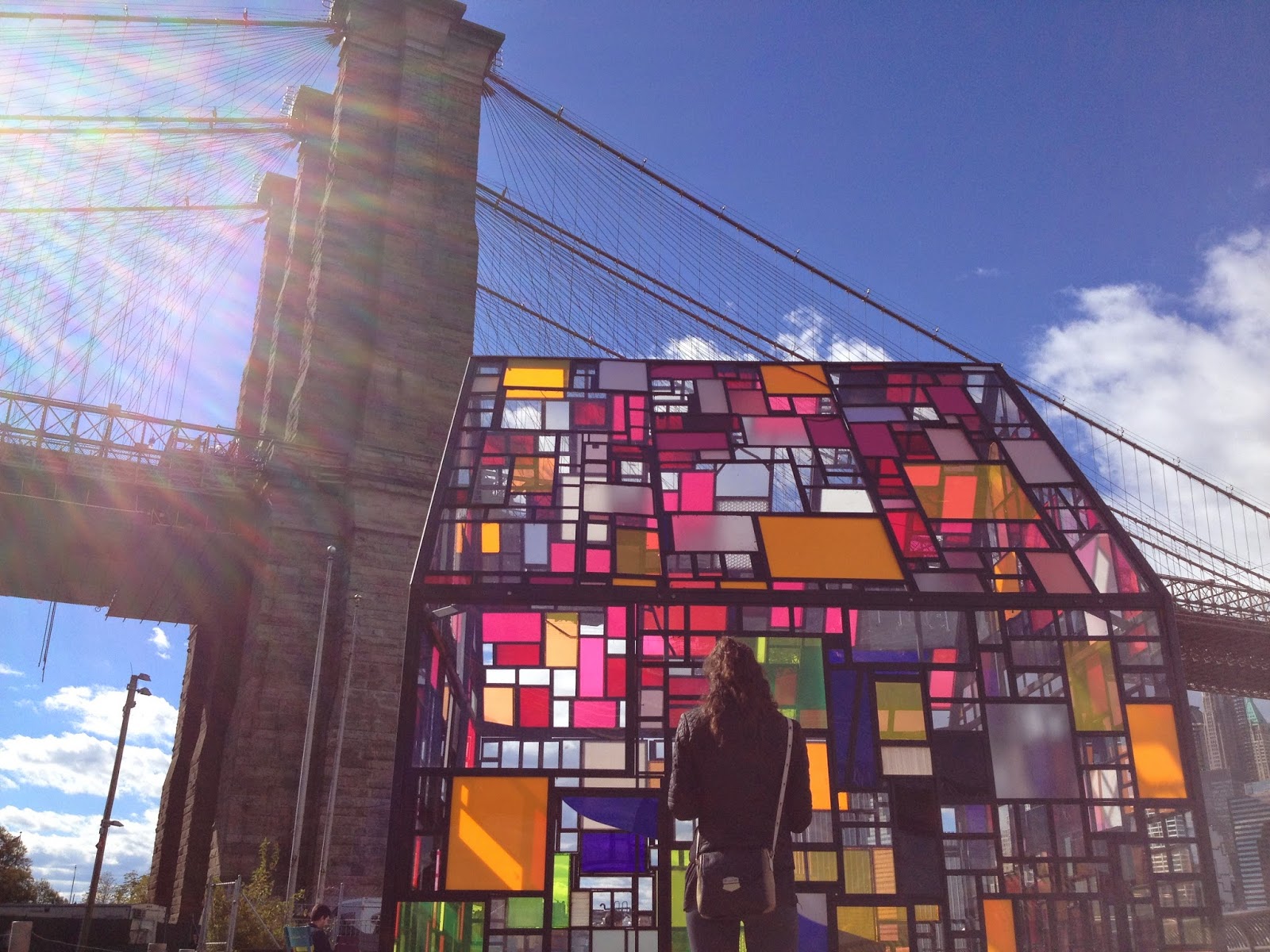 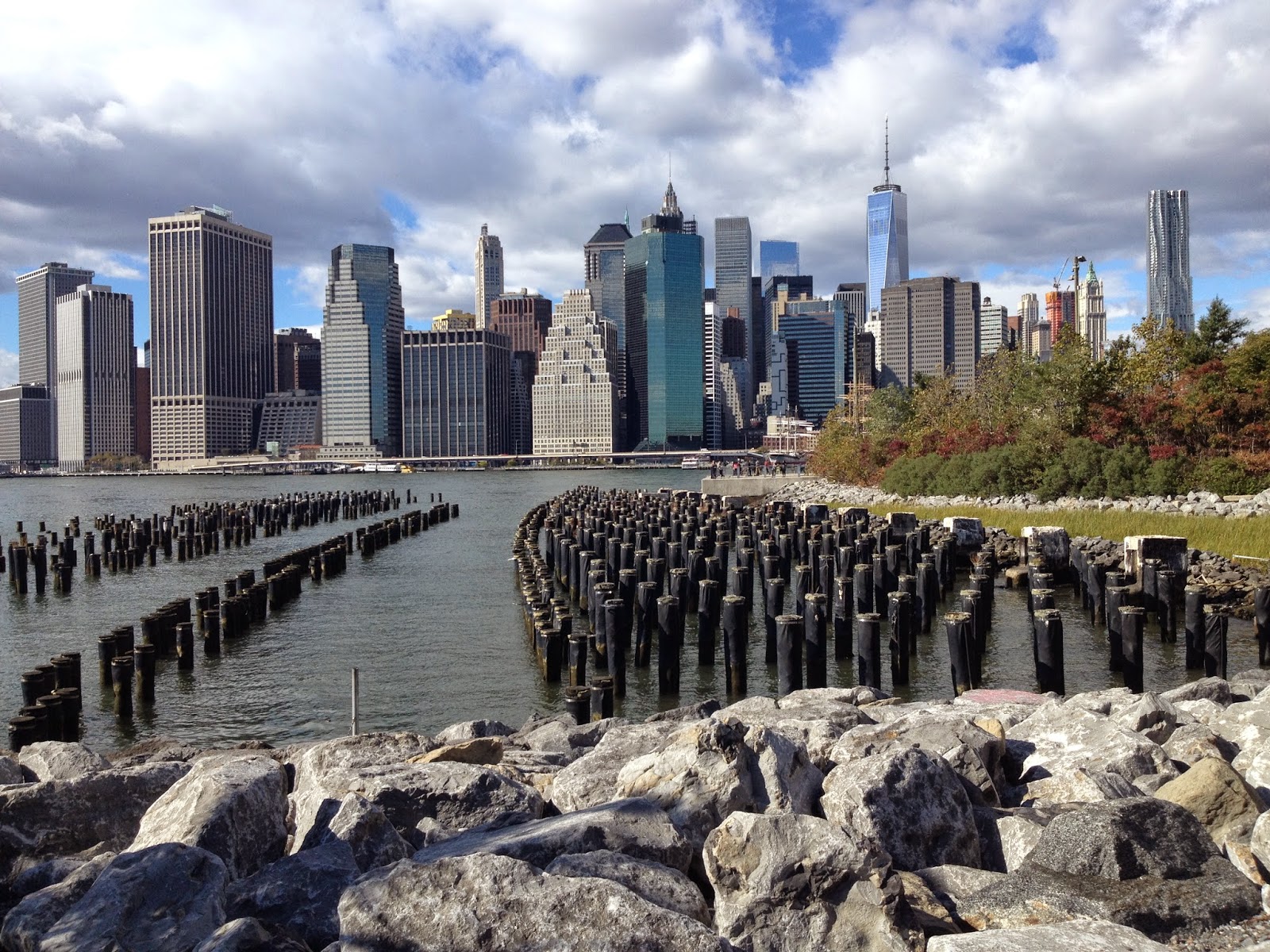 A casual walk later and we hit the market, AKA hub of local grub. 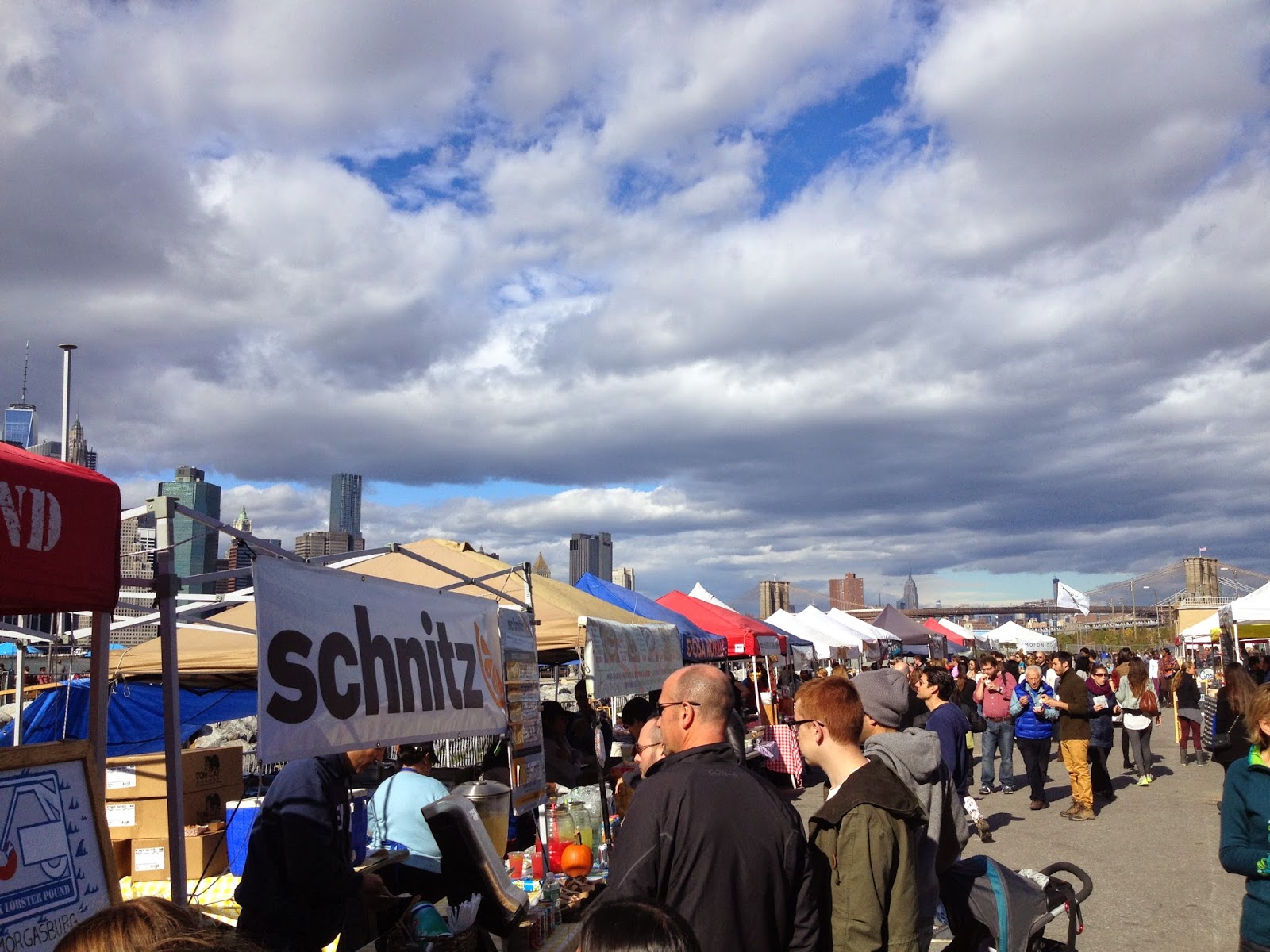 With more mouthwatering vendors than our stomachs could possibly handle, we did a few laps to identify which spots we wanted to hit up and in what order. Long story short we got a little bit of just about everything. 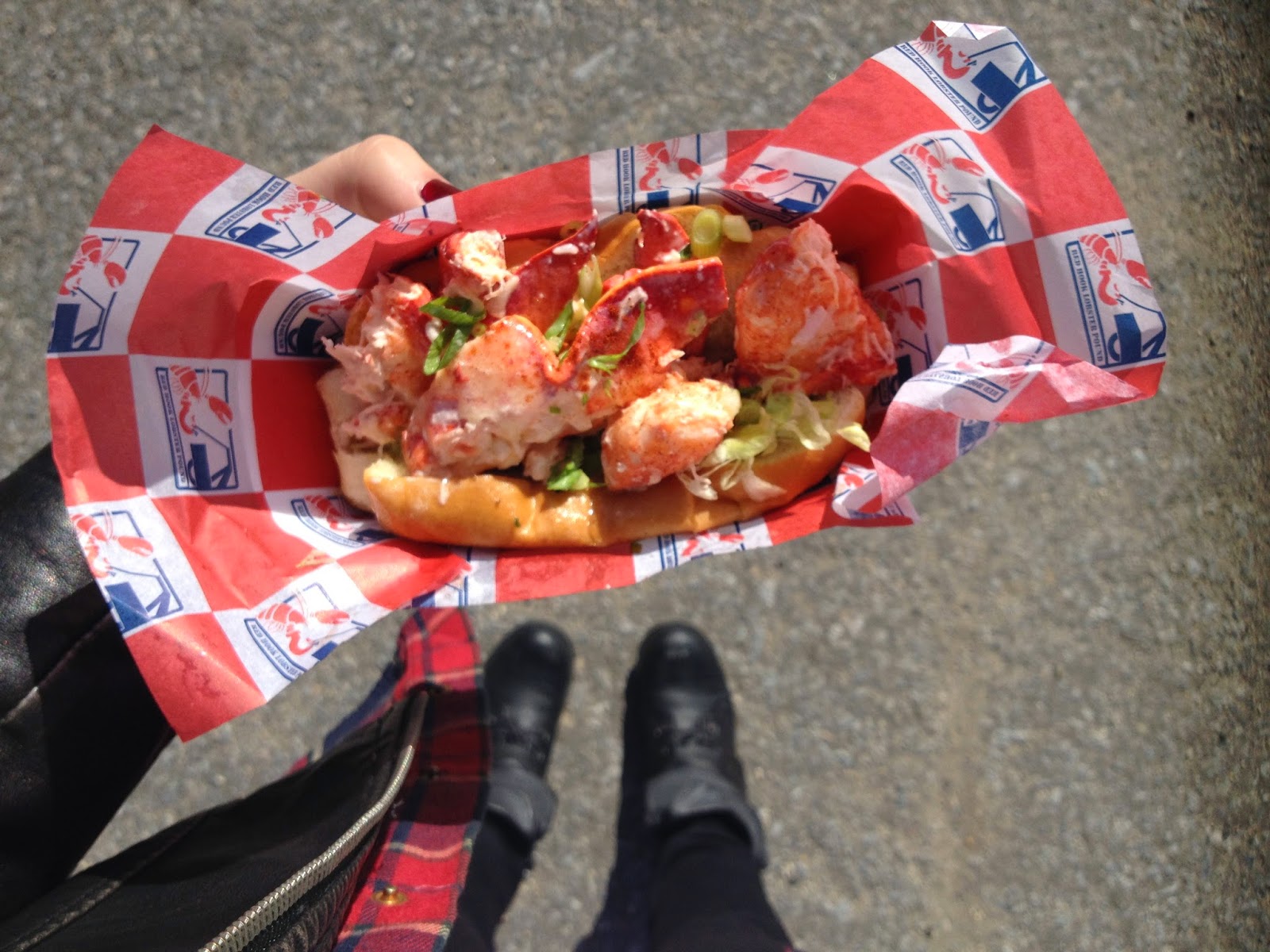 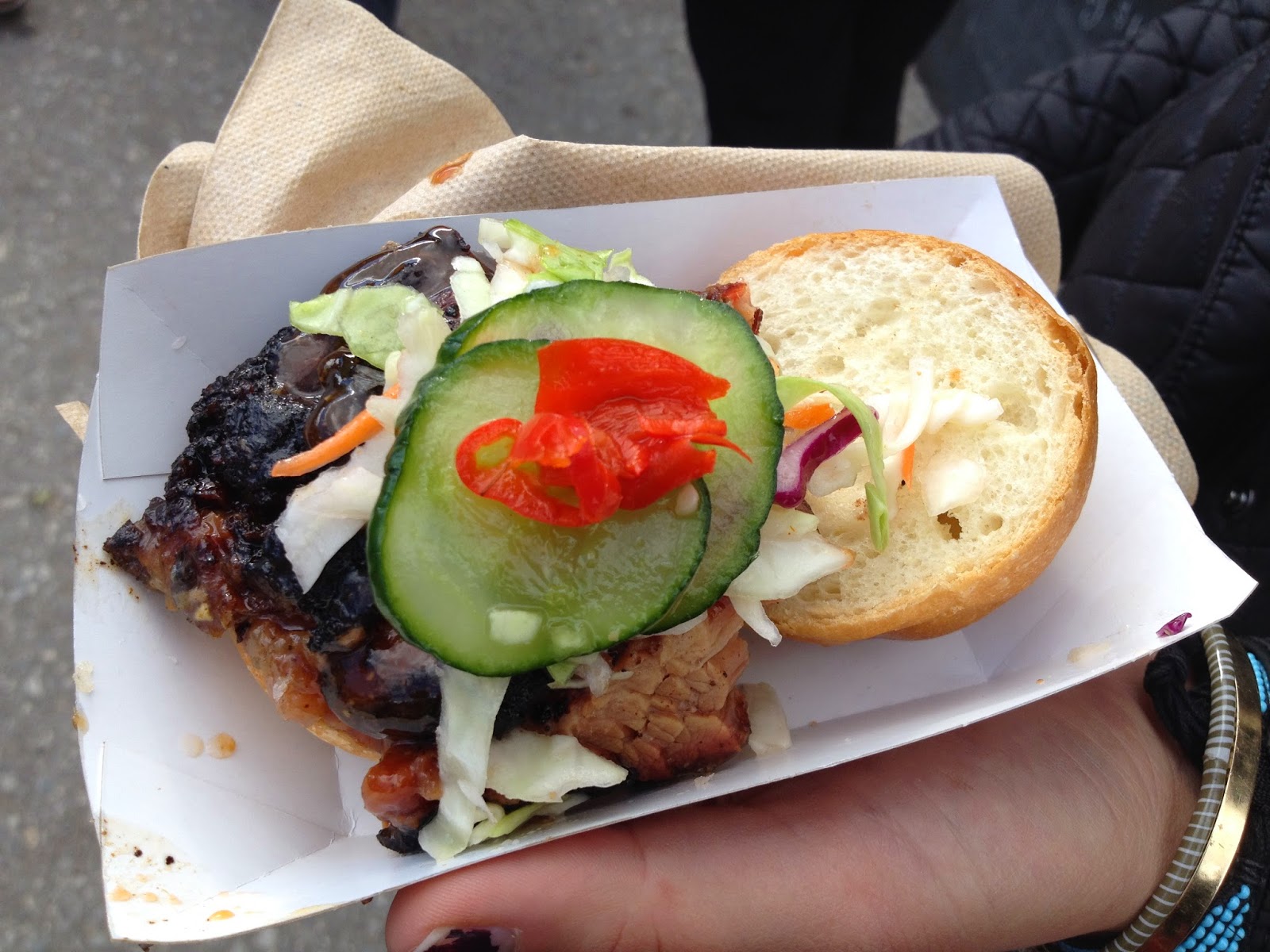 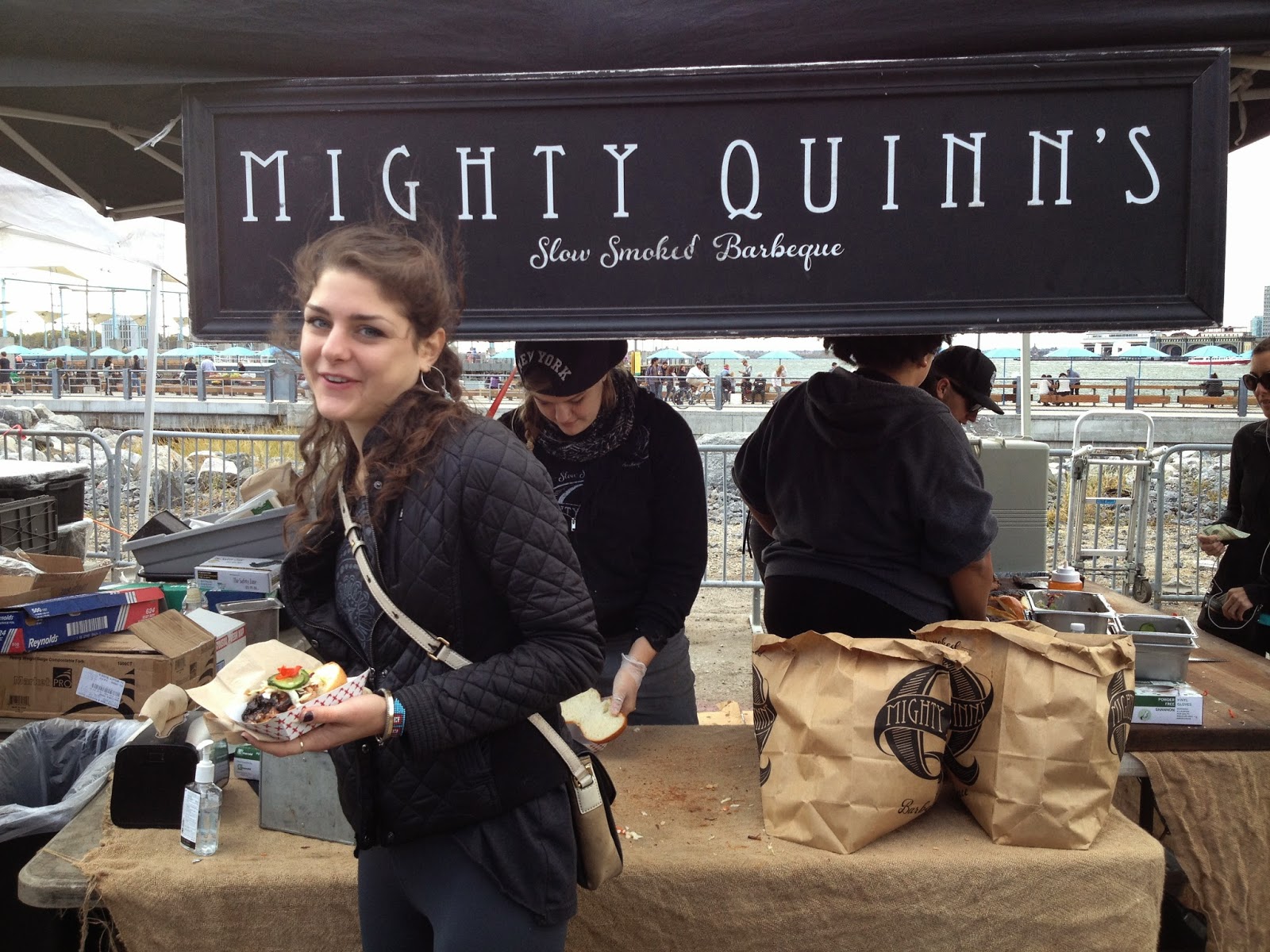 Slow cooked BBQ pork buns, bubble tea, hearty chili soup, piping hot Moroccan chai tea, and a few tasters of a modern twist of brownie bars made with spicy Mexican chocolate. After nearly filling ourselves up to the brim, I found the stand tucked away in the corner that I knew no matter how little space I had left, I was filling it with this prized good - THE RAMEN BURGER. 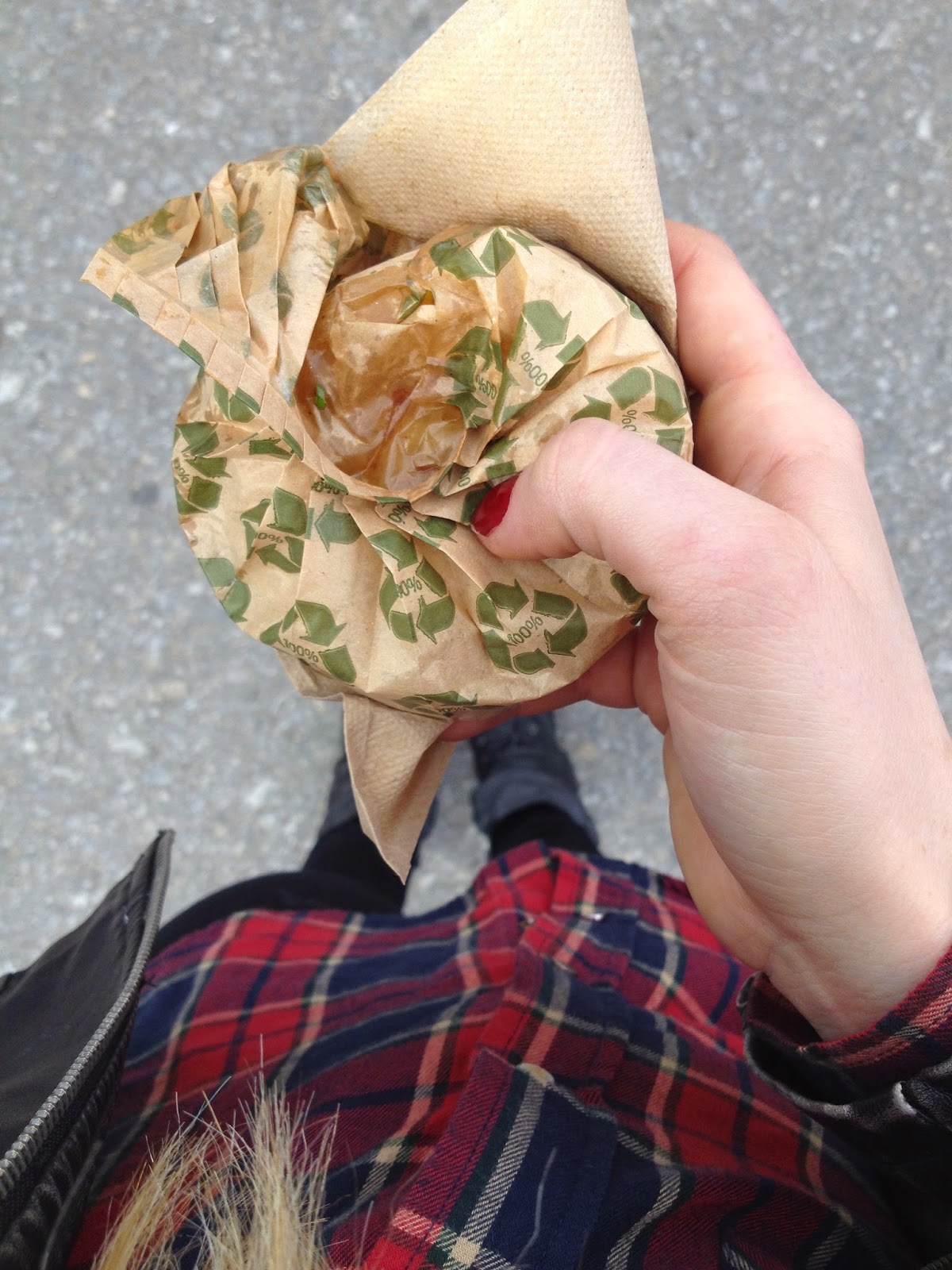 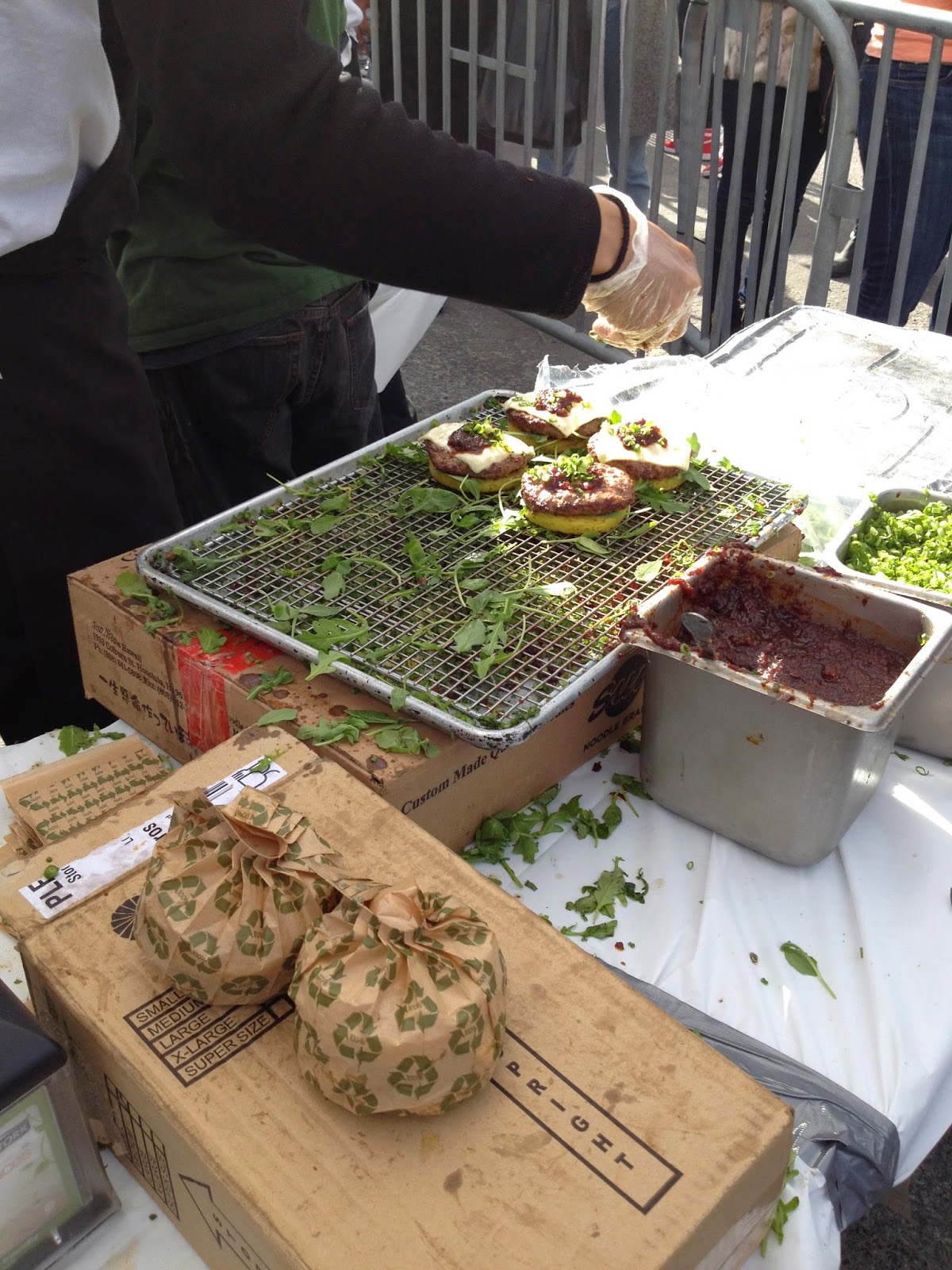 Absolutely glorious. Look, even the wrapping is cool! AND ECO FRIENDLY! Environmentalists rejoice. 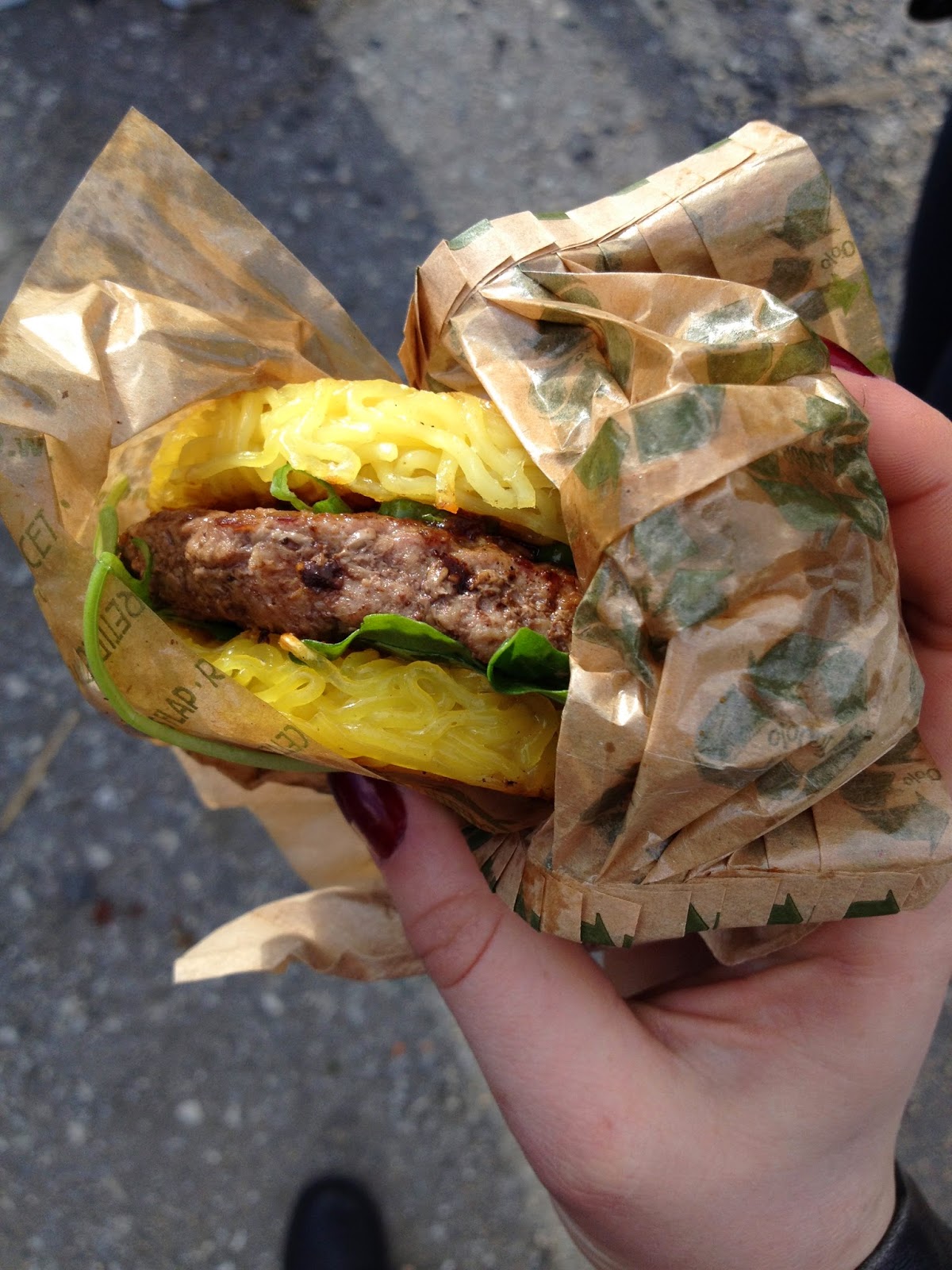 Now, I'd been waiting for this day for many years so I'd already been a ramen burger aficionado before it had even touched my lips.

Step one: get perfect grasp on burger. 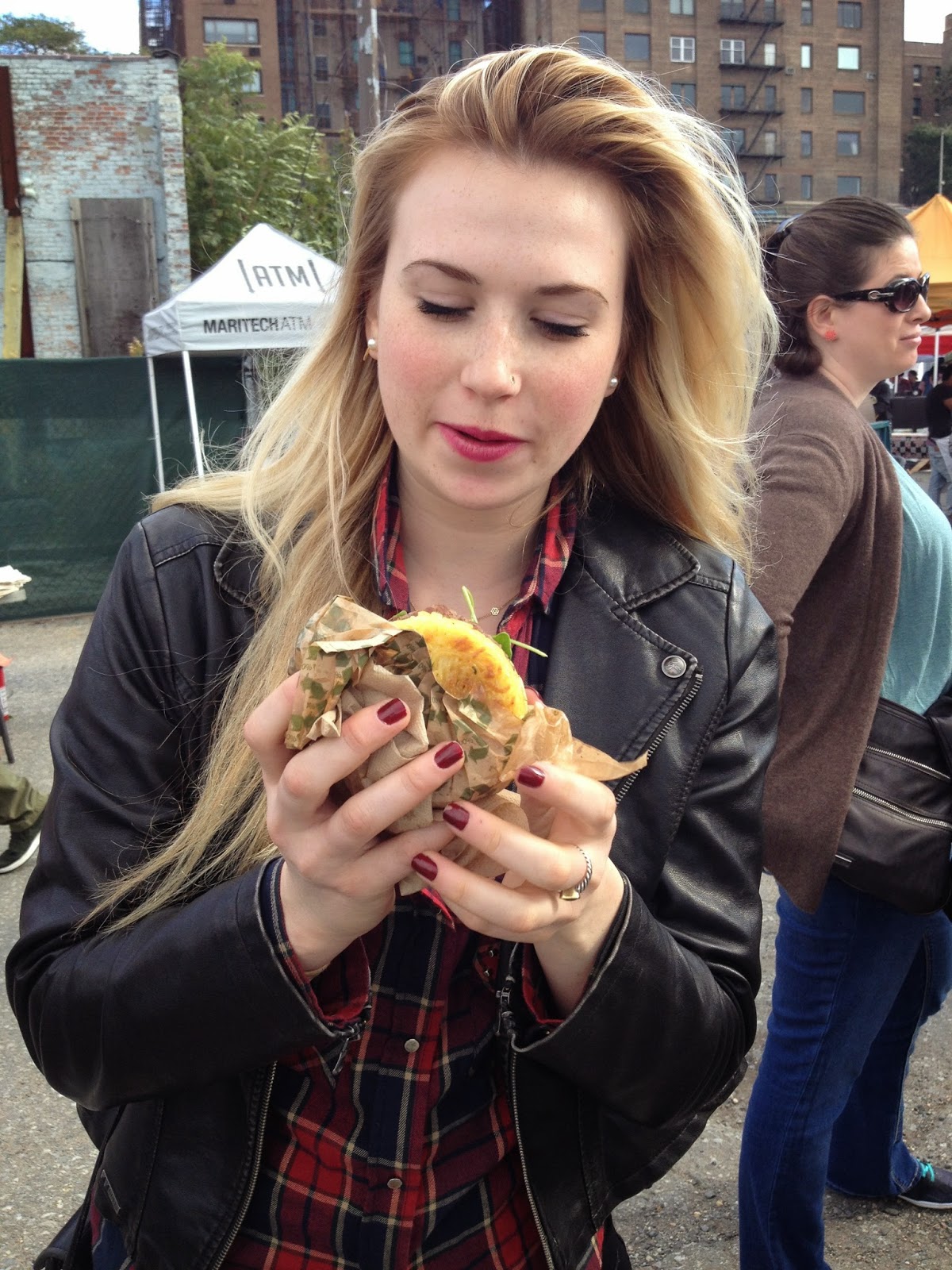 Step two: mentally prepare to eat the food of the Asian gods. 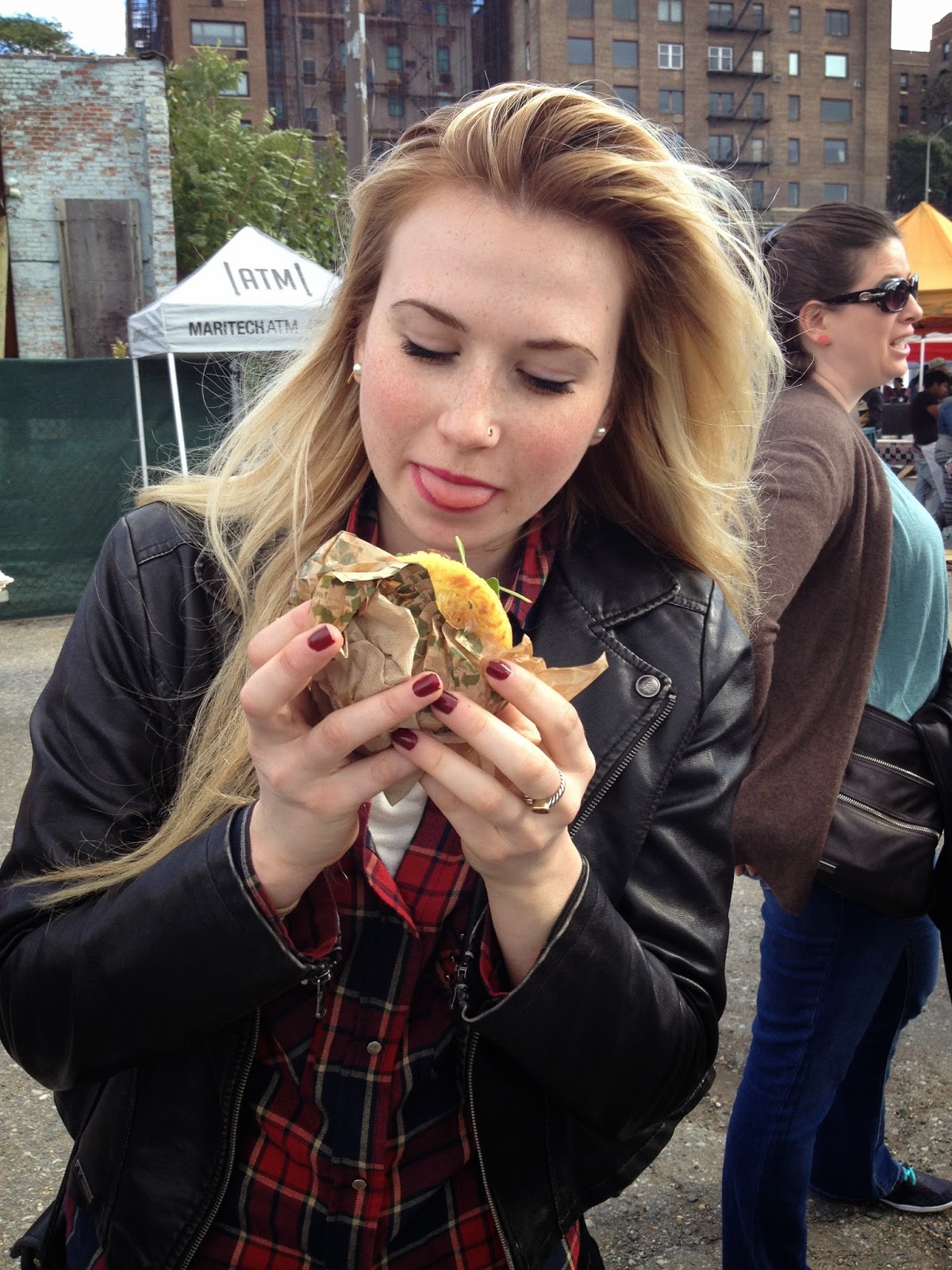 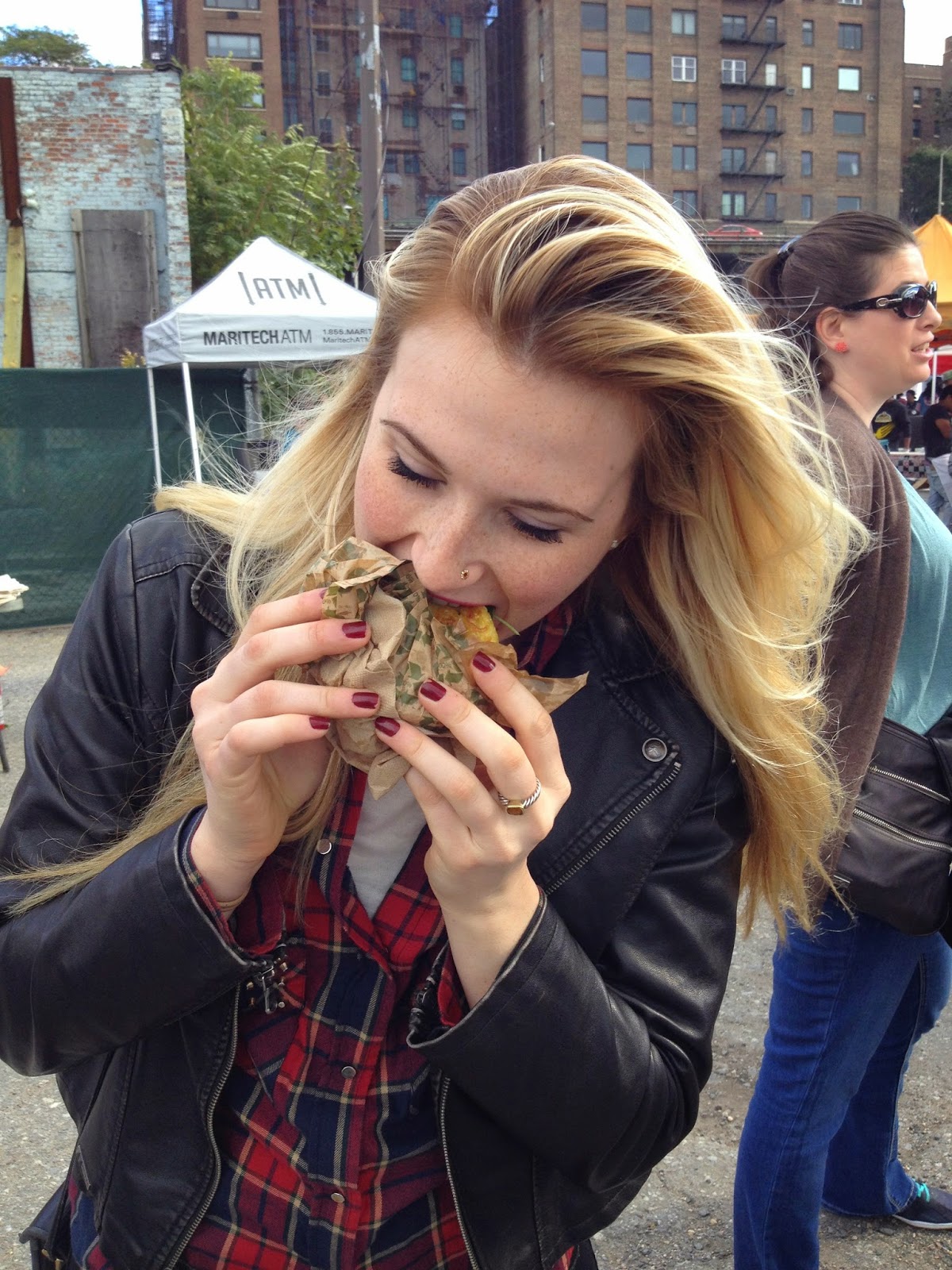 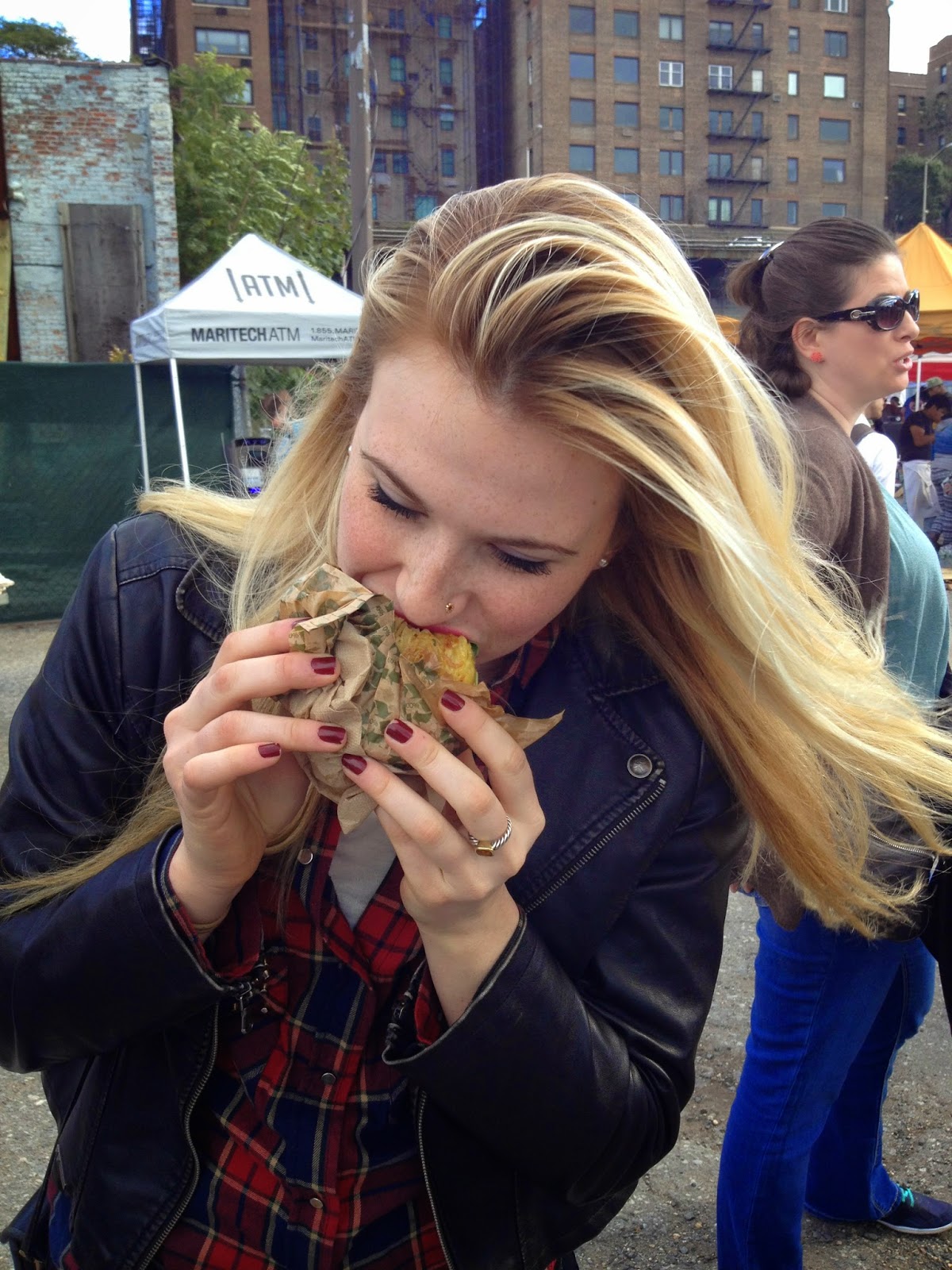 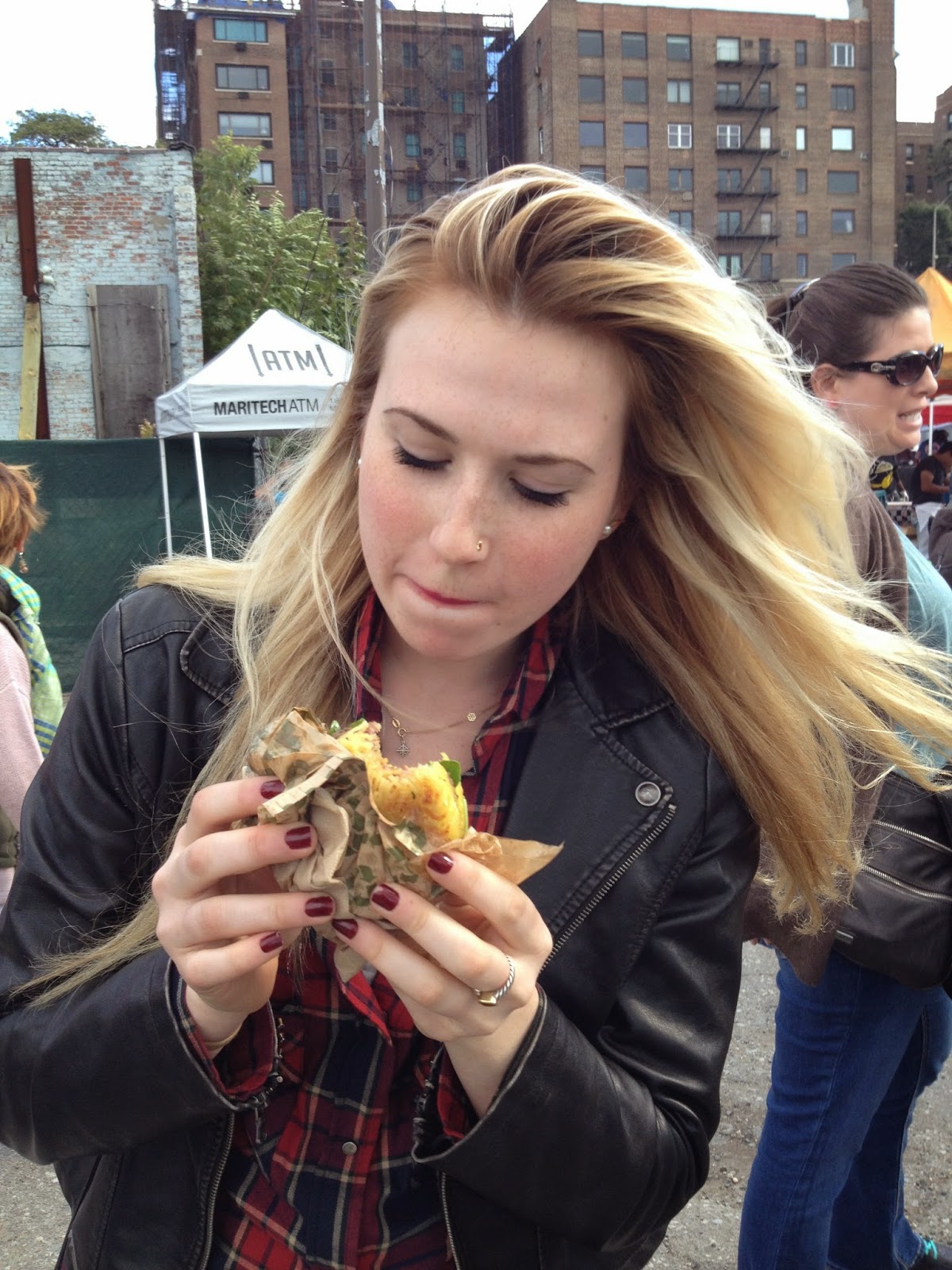 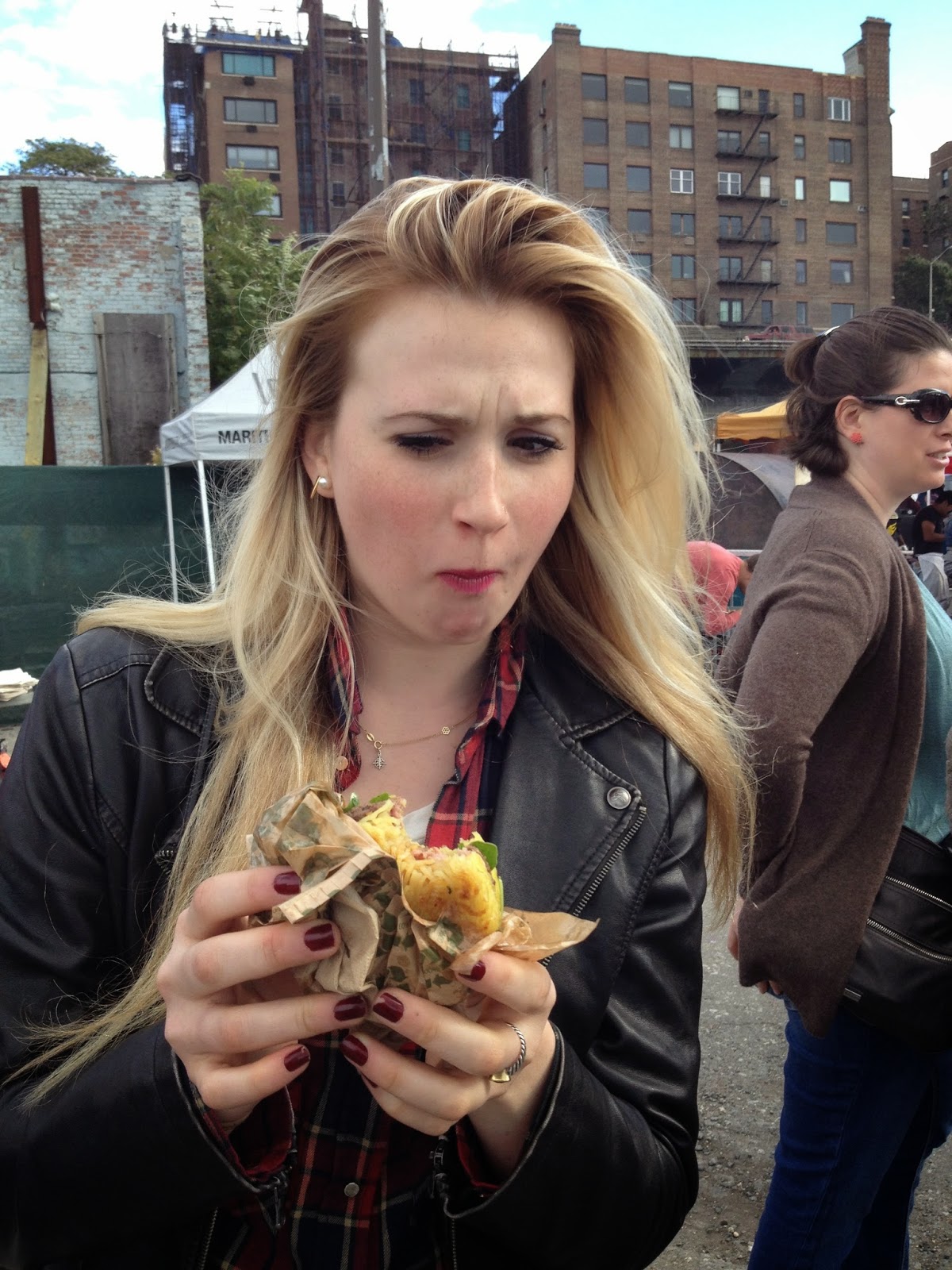 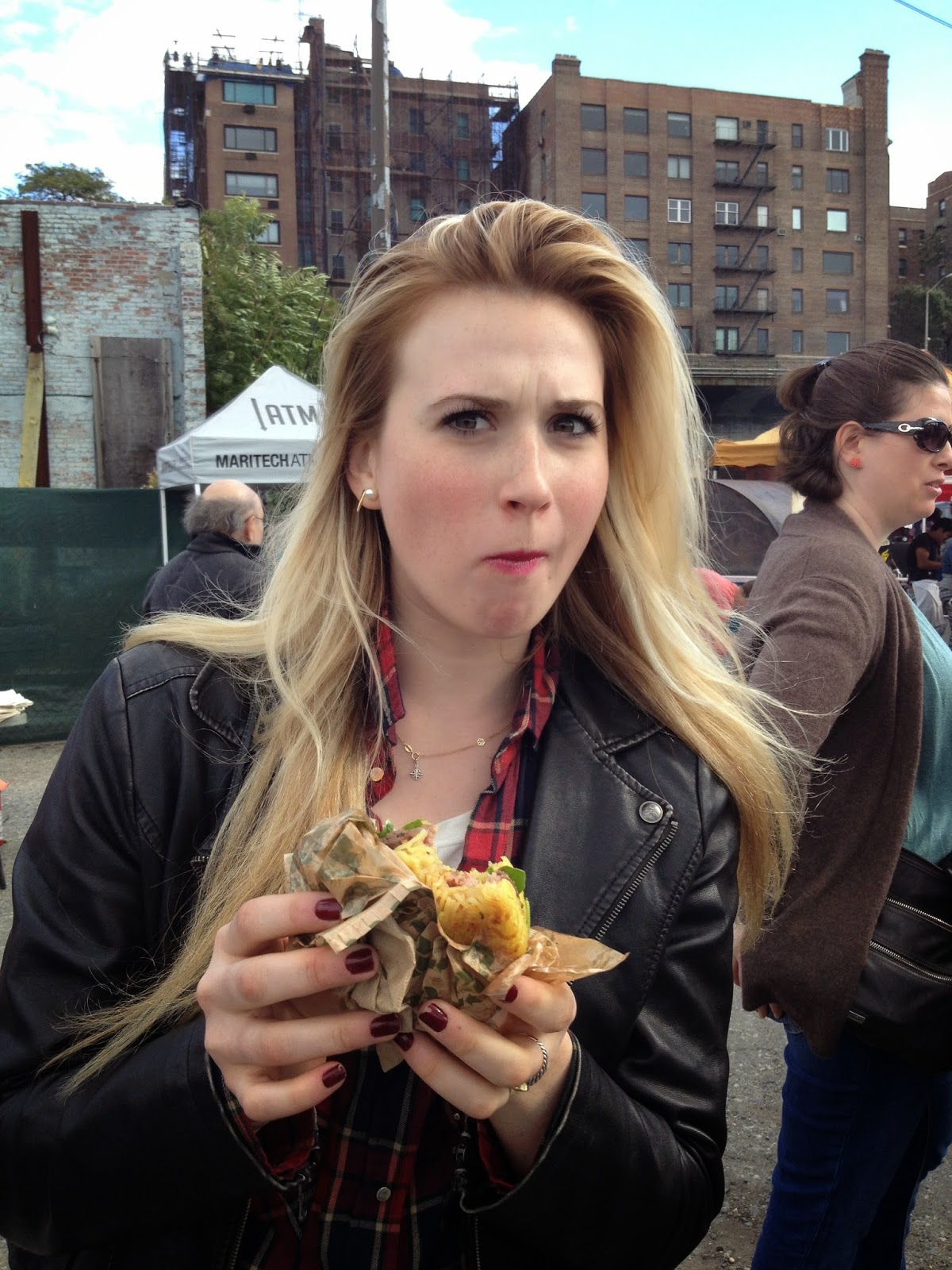 To my surprise, it was BLAND! My entire world nearly crumbled around me in disappointment that it lacked the diversity of spices that I thoroughly enjoyed as a kid when eating raw ramen; absolutely smothered in the seasoning. Nonetheless, it was an experience I am glad I did not pass up on. It was a sensation for the senses in the respect that you are eating a burger….but made with ramen instead of the regular ol' bun.

Next time I'm down in the city on Sunday, I'll be sure to get back in the kitchen with the Ramen boys and show them how it's really done ;)

If you're ever in the city, make sure you leave space in your weekend and in your stomach to stop by Smorgasburg! Check out their website for more info http://www.smorgasburg.com/
Posted by Samantha at 11:49 AM