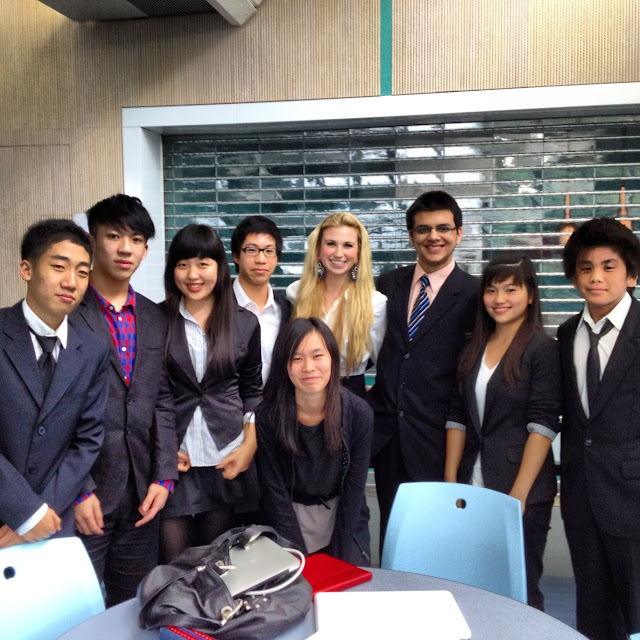 After putting on my fashion forward business outfit (pink/orange ballet flats, black denim pencil skirt, crisp white Faconnable blouse and H&M earrings), I headed off to school for the 2012 Business Day. My school's business and econ students were divided into 12 teams (2 extra teams from two different schools) in which each had a CEO (team leader). I was lucky enough to be chosen as CEO for Group 7 and paired with these fabulous business minds.

The competition was to design a marketing plan which would increase revenue for the KELY Organization (an NGO that provides services to drug and alcohol abusing teens to help put them back on track and assist them in pursuing their goals) which we had all day to do so.

Throughout the day, each team had the opportunity of getting $1000 donations (play money essentially) from the business men who wandered about giving advice and getting insight of each team's plan. In total, my team won with the highest amount of $57,000.


Here's the plan behind the bucks...
*Necessary background information: In HK, there are 2 types of school systems: local schools and international schools. There are over 12 kinds of international schools (6 of which belong to the English Schools Foundation) scattered all across HK island and the New Territories.
The KELY group targets three kinds of kids: non-English speakers, English speakers, and ethnic minorities. They feel that their organization is widely known amongst the English speaking community, but quite the opposite for the Chinese speaking community. There is also known to be a wide gap between the local and international schools so in order to bridge that gap, we came up with this idea...

We decided to arrange a camp at the international schools during the Easter, Winter, and Summer holidays for local students to attend and strengthen their skills and have fun while doing so. This camp would be divided into 6 sub-camps: music, fashion, art, adventure, cooking, and sport, which would be hosted at the 12+ international schools. The KELY organization lacks not only revenue, but staff. In order to cut corners financially, we decided that we would provide International Baccalaureate   students with CAS hours for volunteering as camp counselors. Another tactic to save money was partnering with large companies to sponsor certain camps as well as the KELY Camp in general. For example, a specific sponsor for the Adventure camp activity of paddle boarding would be Mammut in which they would donate their expertise and equipment in exchange for free advertising. Our general sponsors would be Coca Cola and Subway (to either donate money or food for the campers). You might be wondering how we would have gotten such big sponsors...well here's the simple answer. CSR. CSR stands for 'Corporate Social Responsibility' which is incorporated into a company's framework to internally motivate staff. An example would be McDonald's partnering with the Make-A-Wish foundation and allowing their employees to volunteer at the M.A.W locations. By proposing this to Coca Cola and Subway we'd be setting ourselves apart from other organizations that would be asking for their sponsorship as well. We also compared camp fees to that of the YMCA which charges a whopping $5300 for a 3 day camp. So, in order to be the lowest priced competitor, we would charge $1000 for a 1 week camp and $1800 for a 2 week camp. This is financially acceptable because we would be saving money on: camp locations (held at international schools), staff, and equipment.

After devising a detailed power point of our plan, we pitched it to 2 businessmen and won the competition.

A very successful day for team $ugarmen (a teammate's idea NOT MINE!) but the real prize was the friendships formed and the acquired mind-set of a businesswoman.

Did you do any activities like this in your school? Leave a comment below, I'd love to know!